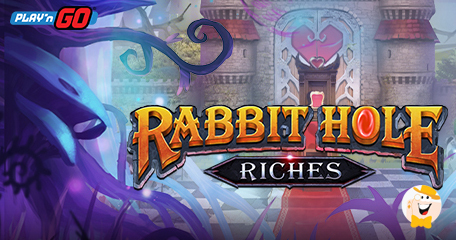 The unbreakable streak of slot releases at Play’n GO continues this week with Rabbit Hole Riches, a thrilling adventure based on the imaginative world of Lewis Carroll’s Alice in Wonderland. This is the 38th title of the year, and it represents a new take on the classic story featuring iconic characters as well as a strong narrative structure.

Still, the latest slot game from the supplier does take a different approach, focusing not on the main character, Alice, but the White Rabbit and his famed pocket watch. It holds the key to winning multiple prizes and entering a world of adventures, followed by medium volatility, five ways to win and a 3x3 grid.

Ready for a Teacup Party?

Although the game starts on a regular shaped grid, we assure you that Rabbit Hole Riches from Play’n GO is not an ordinary slot. Believe it or not, players tumble down 4 different rabbit holes here, each featuring a unique bonus round. While the visual animations during these sequences are quite mind-blowing, bringing Carroll’s classic story to life, users are able to place bets between 10p and £100 per spin. The theoretical RTP sits at 96.23% but it’s totally sufficient to get the action going.

There is a whole bunch of features in Rabbit Hole Riches, including the standard wild symbol that steps in for all regular images. It also represents the game’s highest paying icon, worth 20x for 3 matching items on a line. By landing 3 pocket watch scatters, players will trigger the Rabbit Hole bonus round and there is a Rabbit Reward feature where 2 scatters are thrown onto the reels. Securing three scatters will enable the rabbit to select 1 of 4 different holes and activate a bonus round.

It can all start with a Teacup Party featuring 1 extra spin where only high value symbols emerge. Next, players may trigger the Cheshire Cat Respins feature and earn a single re-spin with expanded 1x3 sized Cheshire cat wilds. The Tower Power feature provides 7 spins on the house, and users can also benefit from Red and White Tower Wilds with expanding abilities. See official trailer here:

As the slot specialists from Sweden continue to push towards to a target of 52 released games in 2020, Rabbit Hole Riches comes in hot after last week’s long-awaited Reactoonz 2, a sequel to the 2017 hit slot. CPO, Martin Zettergren pointed out a couple of significant characteristics about the studio’s latest game and said:

“There’s plenty for players to enjoy in Rabbit Hole Riches; from distinctive sound and design through to several great features, tied together by a wonderful story. There’s so much here to discover; players are going to be revisiting this one over and over again.”

There is still a lot more to go and Play’n GO plans to deliver 14 new releases by the end of 2020. The studio recently accelerated its pace by launching a triple game release: Celebration of Wealth, Temple of Wealth and Beast of Wealth. Some of the titles, whose unofficial names started appearing in the media, are Disco Diamonds, Madame Ink, Rise of Athena and Golden Osiris, while November and December releases remain unknown for now.

Perhaps the biggest hit of the month is the aforementioned Reactoonz 2, a long-awaited sequel that has already won the hearts of operators and players, featuring not only an enhanced engine and immersive gameplay, but Energoonz and Gargantoon, creatures from other slots whose follow-ups are yet to be announced.

This really looks interesting with so many bonuses, definitely something you need to try.

Straight from Alice heading to the White Rabbit as the popular slot's character. These are beloved characters that a lot of people grew up with, so my opinion is that the slot will be a success.

Great game with the rich paytable, plenty of little bonus games. This is going to be a real adventure.

Another great game worth checking out. If someone knows how to use a classic story and make a slot out of it, it’s definitely this studio. Tremendous job!