Player Hits $45K On Double Or Nothing At Miami Club Casino 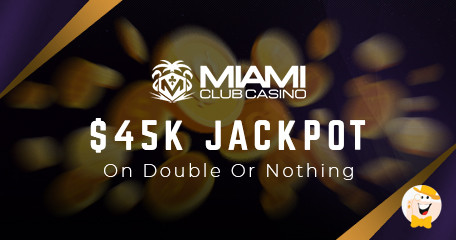 A certain player from Texas, Gerry M. from Dallas, has managed to trigger a double or nothing prize at Miami Club Casino last Thursday, May 3rd. Whether it had to do something with renowned Texan bravery, fearlessness or purity, we cannot say. However, we do know that Gerry had recently joined the venue, playing not more than a few times, usually progressive jackpots, as any other amateur would do upon registering.

The big win was struck precisely on this day, only a week earlier, after boring 20 minutes of random clicking on Mega-Money Mine’s spin button, from which the Texan switched to WGS’ Ultimate 10X slot – a relatively new release with three reels and a part of the WILDX series. Now comes the interesting part: after betting maximum $5.00 and three credits ($15.00 total), Gerry placed 40 bets and scored a couple of wins. Nonetheless, after making that fateful 41st spin with approximately $400.00 in his account, he landed a $ sign alongside two 10X Wilds – this multiplied his 45X win by 100. Suddenly, a sum of $225.00 became a whopping $22,500 treasure!

The story doesn’t end there and Gerry had one more ultimate test to pass. I know, it sounds like a sentence from Indiana Jones movies, but the video slot offers an opportunity to gamble on any win, and that simply changes everything. Our lucky player decided to give it a go and spun the wheel, ending up with twice the sum he had previously won. At this point, Gerry has a big smile on his face, as Ultimate 10X starts counting mind-blowing $45,000 USD!

To be honest, it takes a lot of cojones to place $22,500 on double or nothing, since gamble features are not very popular in the world of slots, said Linda Hernandez, manager of Miami Club. Gerry was incredibly lucky and this was definitely an amazing win, added Hernandez. Apart from inviting promotions, Miami Club Casino is also known for frequent slots tournaments. Its unique games are available on all platforms and there is a special offer for players until May 31st – 25 extra rounds on the City of Gold for placing a deposit and using a coupon code, MAYDAY.

“25 extra rounds on the City of Gold”

trhats great win ! i just sometimes wonder how true this is but if it is great ! and congrats if it is or if its not will not stop me from playing lol cant win if you dont play right ! plus miami club ids great one of my all time favs !

I would like to know where he got the balls to do that? Was he drinking, or is he one of those people who's money supply is unlimited? Still, got a lot of balls to do it. You know, I am sitting here playing that same game at Intertops and nothing near that will even enter my mind. Then again, I am not playing $15 a...

I would like to know where he got the balls to do that? Was he drinking, or is he one of those people who's money supply is unlimited? Still, got a lot of balls to do it. You know, I am sitting here playing that same game at Intertops and nothing near that will even enter my mind. Then again, I am not playing $15 a spin, either...... Geese..............

Congratulation! What a great win, I would like to hear how he will spend it :)

Quite daring move, congratulations to the winner!

What a brave move and lucky sweet win! Congratulations to him as he earned and deserved every dollar of that double up for pushing on past that first win. When you know, you know though right? He felt that win coming and listened to his intuition good for him!!

They say fortune favours the brave, and that was certainly the case with Gerry M. Congratulations to the lucky winner! :)