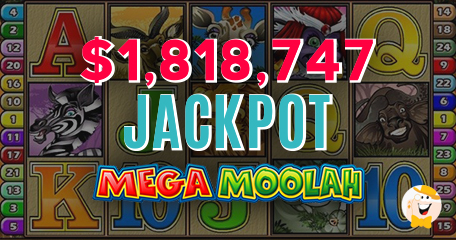 An anonymous player snatched up almost two million dollars on a Mega Moolah Jackpot and became the first person in a while to have won a staggering $1,818,747. It is now the largest mobile jackpot ever paid, making it bigger from the previous record of $219,523.

Mega Moolah is an online slot with a progressive jackpot from Microgaming, and it can be seen in many online casinos. The Mega Jackpot can be won during a randomly triggered bonus round, when the slot starts a mini game with a big wheel of chance. Only the luckiest can land the wheel on the right spot and win the jackpot, which is always paid out in big piles of cash.

Only a month ago, a Norwegian player claimed a 3.7 million dollar jackpot, and some smaller amounts while playing other games. There are no details of the winner at this moment, but they might as well remain hidden due to safety policy.

This is the 37th jackpot in the game’s history, coming after only two weeks when another ‘average’ $1,599,224 prize was won.

Mega Moolah is a revolutionary five-reel and a 25-payline slot machine with a free spins bonus and progressive jackpots, featuring a jungle theme with zebras, buffalos, elephants, giraffes, ibises and lions. It features a wild and a scatter symbol which can trigger incredible winning combinations.

Many slots from Microgaming feature the same jackpot, and some of these titles include Mega Moolah Isis and Mega Moolah 5 Reel Drive. The enormous jackpot is surely one of Microgaming's most popular features, as it hosts immense prizes, the largest of which is over £10 million.

Oh My! how lucky you are winner of the Mega Moolah Jackpot. Imagine looking up at the screen to see those words that you won the Jackpot. It can happen to anyone, and I now make sure I play Jackpot slots because you never know. What a moment to look at that scree and see this. Congrats to you!

Mega Moolah Jackpot got hit in a very short interval. I am very curious about the bet size of the trigger spin. The player had a life changing win, congratulation. I haven't played Mega Moolah recently, and I should play it again, soon :) Good Luck.

Haha, of course Jade, good point! I meant average as in less than $3.7 million, or $8 million - previous two Mega Moolah jackpots from May and April. :)))

Of course, it goes without saying, but in any case CONGRATULATIONS to the lucky son of a gun who won! With that being said, It's the 37th jackpot in the game’s history, now that is crazy amazing! And to you, Alex, I'd be more than happy to get one of those "average" $1,599,224 prizes, how about you...........