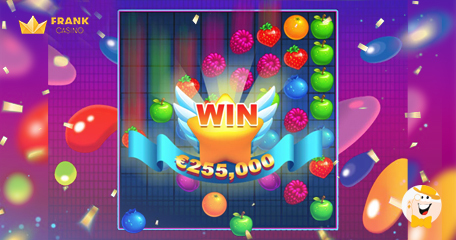 It turns out that warm recommendations from live casino streamers aren’t sometimes just a commercial trick. This week, a player from Germany who had deposited €150 to his Frank Casino account hit a lick of €255,000 after playing one of the biggest fruity favorites, dubbed Jammin’ Jars from Push Gaming, a UK and Malta based studio.

The lucky winner who goes by the alias Frank_ykDMDge5 had registered at Frank Casino during Summer, sometime in August, after watching a casino streamer’s show. After collecting the prize, he disclosed to the operator that €255k is not his first big win, since he’d already won massive amounts in the past with other casino brands. He had also shared that the money from previous wins was used purposefully for a new apartment.

We have to admit that sticking to your favorite picks carries a lot of uncertainty, but not in this case. The German player freely admitted that Jammin’ Jars and Razor Shark (also developed by Push Gaming) are, in fact, his favorite slots!

For those of you who are not familiar with the title, Jammin’ Jars is a fruit-themed slot machine full of sticky wild jars with increasing multipliers. There is also the Rainbow feature, adding one or more giant fruit symbols to the board when triggered. Interestingly, this colossal win comes during Frank Casino’s Birthday Month, a time of exclusive deals and perks for regular players.

Since we’re talking about a jubilee here, the operator celebrates its sixth birthday for the whole month of October! New players are therefore greeted with a specially enhanced introductory bonus which remains active throughout the entire festivity. There are three game provider tournaments active at the moment, including a trio of special tours, organized by the Frank Casino team.

We’re sharing with you a short recap of current 123% welcome bonus deals on first three deposits as part of the grand birthday celebration below. There is also a special welcome bonus for players who register during the birthday month, running through October 31st, 2020.

Ready for Another 6 Special Tournaments?

As a special gift for its most loyal members during these birthday celebrations, Frank Casino has set up three tournaments in collaboration with some of the industry’s most reputable game providers.

The Amatic Tour is already over and it ran from October 2nd until October 5th. If you tune in right now, there is still time to take part in The Pragmatic Play Tour, as it’s live from October 9th through October 15th. It features a €10,000 cash prize, while The Microgaming Tour which also comes with a €10,000 reward, is set to start on October 23rd and will end on October 31st.

Moreover, Frank Casino organized special tournaments “A Red Carpet Affair”, “Black Tie” and “The Grandest of Eves” to allocate an impressive amount of €160,000. Visit the platform today to learn more and don’t miss your chance to claim a share of these incredible prize pools (register through our link and earn $3 LCB chips for making your 1st deposit here).

This is awesome! Congratulations to the lucky player! :)

Wish I was that lucky :) Nevertheless, congrats to the lucky player!

This is amazing! I believe the player is shocked, who wouldn't be, but hey it's real! :)

So happy to hear it. Please use the winnings in appropriate way. OMG, it can't believe it. That's too much a six figure amount. Congratulations to the winners.

That kind of a win is out rages but I’m sure the question everybody has or whatever Red should be asking is what steaks was he playing there’s no way he was getting a nickel or even a dollar per spin you think he would be playing like 50 or $100 per spin in order to win like that. I mean, am I right or am I correct anybody...

That kind of a win is out rages but I’m sure the question everybody has or whatever Red should be asking is what steaks was he playing there’s no way he was getting a nickel or even a dollar per spin you think he would be playing like 50 or $100 per spin in order to win like that. I mean, am I right or am I correct anybody feel free to weigh in and let me know. Because when I usually bet like a dollar spin I’m can usually win about 100 with a feature I imagine it should be about the same with that game as well so how much per spin when hitting the big win??!

Wow what a lucky guy and what an incredible sum, I could definitely use some of that money and get me a new condo or a car. Come to think of it, I could also quit my job, at least for a while.