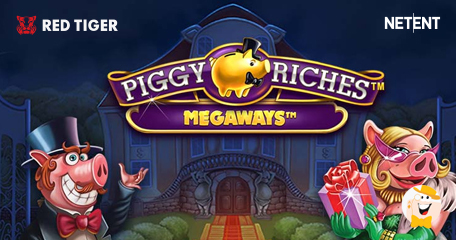 Born as a result of fruitful cooperation between two gaming giants NetEnt and Red Tiger Gaming, Piggy Riches™ Megaways™ has conquered punters from all over the globe instantly. The most recent confirmation of the game’s immense quality comes in the form of excellent acclaim- this release was selected as the most popular slot of 2020 so far.

Immediately after the launch in January this year, this slot was more than well-received across international markets, indicating that the partnership between two providers brought more value to players. According to the data, it earned the premier place in the UK, Sweden, and Japan, as well as second in Germany.

“Piggy Riches™ Megaways™ is everything we wanted it to be and is very popular with players and partners alike. It’s an honour to win any award, but to triumph in one that is based on hard data is particularly pleasing and is testament to the hard work put in by the developers and the strength of our collaboration with NetEnt."

In the UK, a total of 796 online casinos were scanned during the judging process, with 234 of the most popular then invited to provide the relevant data. To determine which slot deserves this significant acknowledgment, the metric was based on each game’s rank between day 30 and day 60 following its release date.

“Piggy Riches™ Megaways™ really engraved its position in the casino lobbies for most markets. The balanced gameplay, luxurious theme, and the use of Megaways™ technology really ramped up the overall experience of this remake of the classic Piggy Riches™.

“The expectations on this game were high, to say the least, but it’s safe to say that the development team carried these expectations without trouble and delivered a neat end product.”

Would you like to see for yourself what makes Piggy Riches™ Megaways™ so popular among players? Take a look at the trailer and let us know what you think about this slot in the comment section below!

Any Other Classics Revamped?

One more crown of the historic agreement between two cutting-edge iGaming providers comes in the form of Gonzo’s Quest™ MegaWays™. The game, which is among NetEnt’s crème de la crème titles, was the first-ever video slot to utilize cascading symbols in place of a conventional reel grid.

…the completion of the acquisition of Red Tiger happened in September 2019. Both sides were extremely satisfied, believing that their combined capabilities will help them create new products that wow their customers.

Approximately 3 months after the deal was sealed, Tiger’s complete portfolio was made available to multiple existing NetEnt customers via the new NetEnt Connect platform. Among other brands that also leverage this inventive solution are Bethard, GML Interactive Brands Stoiximan (Greece), and Betano (Germany).

“Piggy Riches™ Megaways™ has conquered punters from all over the globe”

@ Ammanda I totally agree! There are more examples like this- Microgaming and its independent studios. Some of them introduced remakes of its Mega Moolah franchise, and they look amazing! IMHO, this one's the best! https://lcb.org/news/interviews/absolootly-mad-mega-moolah-q-a

When it comes to cooperation between two giants in the industry, it is impossible not to get such a great game.

It looks amazing :) I like the Piggy-theme idea, it is so colorful and adorable so that it will attract thousands of players. Spin the wheel in a "piggy style"and enjoy :)

This is indeed fantastic news for Red Tiger! Personally, I think there are more intriguing slots than this one, but I suppose this one has some universal appeal, which is why it earned this title.