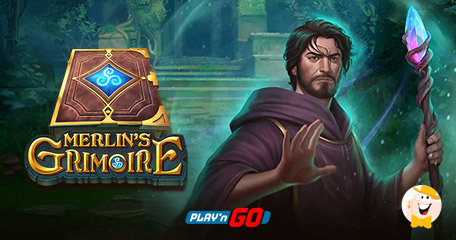 Developer Reveals a New Chapter from the Arthurian Legend

The stories from middle ages are piling up this month at Play’n GO as the software provider rolls out another magic release that tells a new chapter in the Arthurian Legend.

Merlin’s Grimoire is the next follow up in the franchise, and if you’re interested in seeing a young and inexperienced wizard, seeking out an ancient book of spells, this is the title to hold onto; the book not only holds the secrets to the art of magic, but Merlin’s destiny too!

Meet Merlin in His Younger Years

Much like the previous releases in the series, this game also focuses on a single attraction that can lead you to colossal wins. The Symbol Splitting feature is similar to highlights in other Book of Dead style games by Play’n GO, so if you’re a fan – rejoice and get ready for some action!

Merlin’s Grimoire starts off by covering just three reels in the base game, but players have the potential to expand the grid over all five reels during complimentary spins and increase the potential to 7776 ways to win.

As always, the designers behind this game dedicated their attention to every single detail, including the background and symbols all the way to animations. For a game that truly conjures magic on the reels, players are introduced to Merlin in his younger years before he became the wise white-haired wizard to sit beside King Arthur as his royal advisor.

This game beautifully complements the narrative and earlier medieval titles of Play’n GO, such as Lord Merlin and the Lady of the Lake, Merlin and the Ice Queen Morgana and Rise of Merlin.

“Players and operators love the Arthurian Legend titles that we develop because even in one series there are so many tastes accommodated,” commented head of games at Play’n GO, Charlotte Miliziano about the studio’s latest slot.

She also reminded all history and fantasy enthusiasts that the catalog now has four titles in the series, with the addition of 15 Crystal Roses: A Tale of Love for the hopeless romantics, as well as The Green Knight, a tale for the lovers of lore.

The Art of Magic

So far, Play’n GO has conjured four titles with Merlin, allowing the studio to retell the legend of King Arthur and the Knights of the Round Table in its own way. Most of the characters around the throne are synonymous with Arthurian Legend, including Lady Guinevere.

So, if you want to explore the legend and see how the history’s most famous wizard rose to power, check out either Rise of Merlin or the latest title Merlin’s Grimoire – you will be surprised that he started as a young warlock whose powers had yet to mature into the force from the legend.

To complete the franchise, see how the legend of Excaliber was made in Lord Merlin and the Lady of the Lake, while Merlin and the Ice Queen Morgana may tell you more about the betrayal of Camelot and the creed itself.

“provider rolls out another magic release”

Nice looking game, It's interesting to see a young and inexperienced Merlin looking out for the Grimoire, an ancient book of spells.

I've already tried the demo version, and I absolutely love the game. This game has excellent visual effects, and I really enjoy the dramatic voice-over commentary.

Glad they still work on this franchise, it’s like a mini series only you get to play and really get attached to some of the characters. Come to think of it now, Play’n GO is reaaaally good in making these “book of” type of slots, don’t forget Rich Wilde and Cat Wilde too!