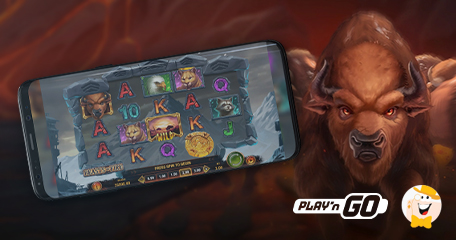 The last month of 2021 has seen several mind-blowing game releases from Play’n GO, but the provider is back on 23 December to put a fiery spin on the classic buffalo anthology in Beasts of Fire.

After wrapping its signature title in holiday spirit, Moon Princess Christmas Kingdom, and rocking the reels with KISS, the leading Swedish supplier for slot gaming in the casino industry returns to the snowy Great Plains to hurtle towards big wins with a herd of mighty bison filled with a fiery energy out of this world!

A Stampede of Power and Fortune!

Following a long line of trailblazing titles in the same category of slots by Play’n GO, namely Win-A-Beast and 24k Dragon, the developer’s latest game, Beasts of Fire, is back to harnessing the popular buffalo universe, an extremely popular category across casinos around the world.

Still, unlike some earlier hits from the provider, this slot machine builds around Buffalo Stacks on reels as well as an expanding reel feature that creates more ways for the player to win – up to 12,348 to be exact! According to the studio, each feature is designed to engage and entertain like never before, keeping players immersed within the story of Beasts of Fire!

As expected, the levels of visuals in this immersive story are epic; you will notice that the bison are always surrounded by a red hue, which is one of developer’s exaggerated ways to represent fire as the beast takes on more of a ‘burnt’ form during extra spins.

In comparison, other animals that appear on the grid, such as a bear, a cougar, a bald eagle, and a racoon all come in colorful tones to stand out from the mighty buffalo.

“We wanted to put our spin on a popular theme in the industry. We wanted to use otherworldly ways to add a new dimension to the Buffalos,” explains head of games at Play’n GO, Charlotte Miliziano.

On another note, the studio wanted to portray the fearsome nature of these animals in real-life, so its team added to their ferocity by placing fiery elements to their powerful characters.

Miliziano also said that the visuals work with Dynamic Payways to create pace within a game, mimicking the rush of a herd of buffalo on the Great Plains. This is exactly what Play’n GO wanted to replicate in one of its last editions for 2021, Beasts of Fire.

In case you missed it, Play’n GO took it to the streets during December, and rolled out an unusual slot game for players looking for a change of pace. Launched on 16 December, Hooligan Hustle is packed with Dynamic Payways, a unique theme dedicated to football culture, and plenty of features to keep users engaged, including comical art style, funny characters, and narrative.

The audio is based on a mix of British bands to encapsulate the game’s standout atmosphere and setting. There are three free spin features in total, labelled by British slang – Lairy!, Riot!, and Anarchy!

Another feature worth noticing is Rumble Row, activated on random spins and capable of awarding one of the following modifiers, either a x2 Multiplier, a Wild Reel or Double Trouble.

You can see more about both games on the provider’s official streaming channel.

“back to harnessing the popular buffalo universe”

They never stop to amaze us with the quantity and quality of the releases. I think they will be even more successful next year. I already saw the release on many casinos sites.

The Buffalo theme seems so popular, but not for me.

This one seems like a decent game. I like animations and design..so I hope for some decent wins.

I'm not thrilled with this release, but the features are good, so I'll give it a chance.

They have created a portfolio worth of admiration over the last two years, truly, their levels of animations, soundtracks, visuals and overall graphics are unrivaled in the entire market. I enjoy playing most of their games, but until they do something about payouts (read: raise them back to normal standards or at least...

They have created a portfolio worth of admiration over the last two years, truly, their levels of animations, soundtracks, visuals and overall graphics are unrivaled in the entire market. I enjoy playing most of their games, but until they do something about payouts (read: raise them back to normal standards or at least where they once were) I’m excluding them from my favorites.