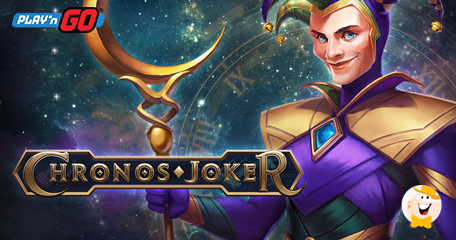 After a series of exclusive launches throughout November, including Honey Rush, Doom of Egypt, Black Mamba, Xmas Magic and a full house of video bingo games, Play’n GO brings a time-traveling adventure to the screens, named Chronos Joker.

So far, the Swedish supplier has immensely popularized the genre by releasing several joker themed slots such as Fire Joker, Mystery Joker and Inferno Joker, each unique in its own way with different levels of volatility.

The Power of Time Manipulation

While the biggest highlight in Chronos Joker represents a combination of highly innovative features regarding time travel, the game’s symbols are portrayed as four timekeepers, including a sundial, an hourglass, a pocket watch and a watch from the future. Other symbols are made up of classic fruit icons such as grapes, plums, lemons and cherries.

The main character acts as the wild symbol and will substitute for other icons to create more winning combinations. However, boosting further wins relies exclusively on multipliers of X2, X4, X5 or X10 on any random spin. In addition, Chronos Joker will transform all multipliers into Super Multipliers and award X4, X6, X8 or X20 payouts if he’s feeling generous.

Other than that, the game’s leading actor can even use his powers to manipulate the reels and activate Second Chance Re-Spin or Spins of the Future, Past and Present, each with different multiplier values.

“Chronos Joker is an exciting game, with several creative and unique features to enhance the player experience. Players are going to love the unique nature of this game and the excitement of finding their favorite feature, and that’s what it’s about for us, providing a high level of entertainment that players will love.”

The title comes with 5 paylines, medium volatility and maximum win exposure of 160,000. It is optimized for mobile devices, top web browsers and it’s available in more than 25 languages.

Kicking off The Festive Season

The gaming studio has also released several unconventional games in time for the festive season, including video bingo games Flex Bingo, Hot Bingo, Park Bingo and SuperBola. These titles are specifically tailored for the LatAm market and provide an original experience of the classic game format.

On November 21st, an entirely new Christmas-themed game called Xmas Magic joined the portfolio and marked an early beginning of the festive season. It is a simple 5-reel slot with plenty of features and holiday-related symbols such as stockings, hot chocolate and candy canes.

“a time-traveling adventure to the screens, named Chronos Joker”