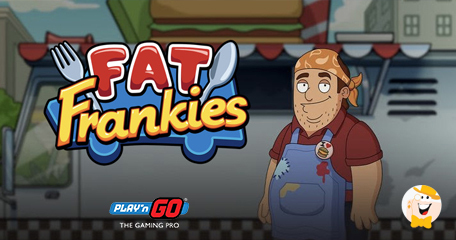 Not long after taking a walk on the wild side in this month’s Safari of Wealth, Play’n GO is back to serve its players a new game they can really sink their teeth into. It is called Fat Frankies and the plot is based on a guy who serves the best food in town.

However, Frankie needs someone to put his name on the culinary map, so if you think you can help him with advertising of his Food Truck by placing orders, giving tips or reviews, you might hit the game’s maximum of 1000x bet and treat yourself to one of his burgers!

Step up to the Best Food Truck in Town

After making a huge success with one of its recent titles, Tales of Asgard: Freya’s Wedding, the Play’n GO team are trucking down the comedy route by releasing a humorous game inspired by cartoon style, called Fat Frankies.

The provider’s latest contribution to its ever-growing portfolio, Fat Frankies, features a very strong narrative where players must build up Frankie’s reputation as being one the best food trucks in town. To achieve this goal, they will have to use four features and enter bonus play – Burger Bonanza, Flip the Tip, Greasy Wild or 5 Star Spins.

In Burger Bonanza, this delicious dish will stick to the reels and reward a re-spin, which continues until no more burgers land on the reels.

Flip the Tip will see players awarded with three coins which they flip into a tip jar. If the coin falls into the jar, it will increase the multiplier. Getting the next coin into the jar and so forth can help players reach the max multiplier.

Next, when animated Frankie appears on the grid, he will spill grease all over the reels and make Greasy Wilds stretch up to five positions.

Play’n GO saved the Five Star bonus spins as the game’s biggest highlight, so each time the Five Star symbol emerges on the reels, it increases the Win Multiplier and adds two extra spins to the counter.

“Fat Frankie’s is the tastiest game in town. We’re in the business of entertainment and this narrative really lends itself to the four features,” commented head of games, Charlotte Miliziano.

According to her, players will be hungry for more and keep coming back to Frankie’s quite often, so take a look at the provider’s latest slot today and give it your best shot!

Meanwhile, there has been another important announcement from the world’s leading gaming entertainment supplier on 14 March. Play’n GO is officially ready to launch its unmatched portfolio of games in Canada thanks to the recent entry in the newly regulated Province of Ontario gaming market.

The sector opens on 4 April and the Swedish iGaming company has already been awarded a supplier licence by the Alcohol and Gaming Commission of Ontario (AGCO), enabling it to go live in the country.

As one of the first suppliers that acquired a licence by the AGCO, the world’s top-ranking gaming supplier will be able to offer residents of Ontario a series of blockbuster titles popular all over the world, such as Rise of Olympus, Book of Dead, Reactoonz, Tome of Madness and more.

Chief commercial officer for Play’n GO, Magnus Olsson, concluded by saying that the regulated markets are vital to Play’n GO and its overall growth strategy.

This game among with just playNgo in general has some of the best games around with the cleverish bonus and welll paying out games there is in my opion anyways there the top 3 favorite slot providors they just need to come out with more games faster and promote them more 😜 but illl always be a fan of them either way keep...

The cartoonish and humorous style of the game is something that I like very much. Everyone loves food and Fat Frankies has lots of it, which will only make you hungry for more (both the food and playing). I'm glad Play'n Go is launching games in Canada, it's a great market and I'm sure they'll find success there.

I have just tested the demo, it looks cute and funny, perhaps I would give it a try in a real version. The Canadian market is so important, it will boost their performance in the gaming market for sure.

The game looks interesting, I like fast food, so I enjoyed a few rounds in the demo version. On the other hand, a great step is their presence in Canada.

The game looks OK, but I'm not thrilled. It takes so much time to activate any of the features, even on the demo version, so I don't have high expectations that something will be different playing the real-money version!

Wow huge step for Play’n Go, and I really like the new game. It reminds me of the Family Guy show a bit, and it’s actually quite fun to play it. Come to think of it, they haven’t had a game like this in ages...