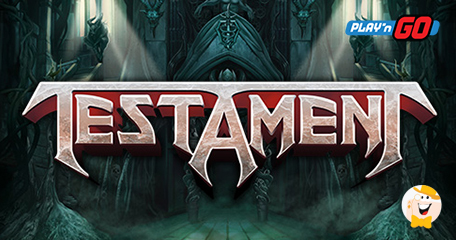 After delving into legend with Fortunes of Ali Baba, Play’n GO continues its March rollout with another music based video slot Testament. This time, the producer has opted for a thrash metal band from Berkeley, California that formed in 1983 and became one of the most influential groups in history. Testament’s eleventh album from 2012 ‘Dark Roots of Earth’ was critically acclaimed and it represents a follow up to their 2008 release “The Formation of Damnation.”

Configured as a 5-reel slot with 2400 ways to win, individual song features with expanded reels, frozen and spreading wilds, Testament offers carefully crafted gameplay that is perfectly matched with hit songs Cold Embrace, Dark Roots of Earth and Throne of Thorns. Its concept of high volatility comes with a substantial 20,000x win potential and three different game features plus Rise up and Testament Spins.

The developer has built quite a reputation in the iGaming industry as a music slot specialist. So far, the studio has published several music-based offerings, including Demon, House of Doom, Sabaton and Black Mamba. To get the right input once again and give Testament a more authentic feel, the company has collaborated with all current band members, lead vocalist Chuck Billy, guitarists Eric Peterson and Alex Skolnick, as well as drummer Gene Hoglan and bassist Steve Di Giorgio.

“Creating a slot based on a band or artist carries an extra weight to it. You have to create a fun, unique slot for players to enjoy, but also represent the band and their music to fans accurately. This game is another “Testament” to our talent for creating entertaining slots, and our diligence in doing so.”

Testament is named after the band and it carries all iconic images from the thrash metal scene, a skull, a vampire, a werewolf, a skeleton and a shield. There is also the album’s cover image, including royals from Jack to Ace card values. Volatility is classified as very high, while the theoretical RTP ratio is 96.20% with maximum exposure of 2,000,000 in coins. Apart from its availability in 37 languages, desktop and mobile modes, this video slot from Play’n GO is fully accessible in all recommended browsers and supported operating systems.

The biggest highlight of the game begins with three Song Features that are triggered by landing two scatters in a single spin. Players are awarded with three complimentary rounds during this mode and each stage activates different winning possibilities – sticky wilds, increased skull HP or expanding grid.

Rise up Spins are activated when at least 3 scatters appear in a single spin, bringing 4x or 20x multipliers. There are nine extra spins during this mode. If scatters smash through a stone blocker on all spins, the game will initiate Testament Spins.

During this round, players are instantly given another three spins which can combine powers of the previously mentioned Song Features and make all wilds sticky. Since the beginning of this year, Play’n GO has also released Legacy of Dead, Wildhound Derby, Wild Blood II, Coywolf Cash, Leprechaun Goes Wild, Dawn of Egypt and Fortunes of Ali Baba.

Thank you for your feedback, Fiekie247! Let's see what other players will have to say.

I played this slot randomly the other day at another casino. First of all Its very hard to get 2 scatters to trigger that feature with sticky wilds. triggering the bonus takes forever so it means its highly volatile. Luckily I triggered bonus and made it to the Testament spins with more ways to pay and sticky wilds and...

I played this slot randomly the other day at another casino. First of all Its very hard to get 2 scatters to trigger that feature with sticky wilds. triggering the bonus takes forever so it means its highly volatile. Luckily I triggered bonus and made it to the Testament spins with more ways to pay and sticky wilds and manage to get a x100. This slot is good to get a hit and run and make a profit, but not good for wagering. You need a good starting balance for this slot atleasst x250 spins to start of with.

I love this mix. I hope more are in the making.

They are the true masters of iGaming. If this video slot doesn’t win a prize, I don’t what will. A true masterpiece.