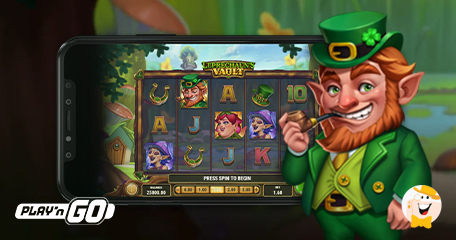 Is the Luck of the Irish with Us This Time?

Continuing to surprise players with one new online slot adventure per week, Play’n GO announces another great addition to its burgeoning Leprechaun-themed series. Inspired by the wealthy folklore of Ireland, Leprechaun’s Vault sees brings an abundance of themed symbols painted in the most vibrant colors.

Arranged as a 5x3 layout, the game displays a jaw-dropping potential of 9,000x the total bet. There’s a wide variety of engaging features as well, each equipped with a special power that further shapes this fun-filled adventure.

As soon as Leprechaun's Vault by Play’n GO is launched, players are introduced to Larkin the leprechaun. Like any other leprechaun, he often ends up in all kinds of trouble, due to his mischievous nature. Luckily, he has a heart of gold, thanks to which he always finds his way to the end of the rainbow.

…it wasn’t Larkin the one who was monkeying around this time- it was the fairies. They stole his key to the magical vault, so he’s looking for someone to help him retrieve those keys- dare you join him? It’s a perfect opportunity to find out the true meaning of the “luck of the Irish” and win a portion of Larkin’s immense fortune.

Head of Games at Play’n GO, Charlotte Miliziano commented on the newest addition as follows:

"The Leprechaun theme is a popular one in the industry, and we think Larkin’s cheeky personality matches Play’n GO’s outlook perfectly.”

Presented as a coin bag, the Multiplier Wild substitutes for all the symbols except for the Key, which represents the Scatter. Wilds can land on the central reels only. Each of them has a random multiplier with x2, x3, or x4 value.

When three Scatters hits the first, third, or fifth reel…

…they activate Treasure Free Spins. Before Treasure Free Spins begin, players are presented with the Vault. The combination of numbers displayed on the Vault determines the number of extra spins. While this feature is on, Wilds are assigned one more superpower- they become sticky as well.

A Couple of More Leprechaun-Themed Slots

The most recent addition represents the fourth game to join the studio’s action-packed leprechaun-themed collection.

Back in 2013, the provider unveiled Leprechaun Goes to Egypt. Leprechaun himself acts as Wild, whereas Cleopatra represents the Scatter. There’s a Bonus Scatter as well, presented as a pyramid, which can take players to treasure chambers where ancient Egyptian treasure awaits.

Three years later, Leprechaun Goes to Hell was added to the catalog. Accommodated on a 5-reel grid, this story introduces players to the wicked she-devil ‘Evilene’ and the Leprechaun, both acting as Wild symbols. 3 Evilene symbols activate the Infernal Bonus, during which both the temperature and the chance to reach the top Jackpot increase.

In 2020, the collection was reinforced with the addition of Leprechaun Goes Wild with Luck of the Irish feature. Two Scatters activate the said feature, while three of them initiate the Free Spins feature, opening room for solid winning opportunities.

“a jaw-dropping potential of 9,000x the total bet”

Awesome slot machine, it is excellent visually and pays a lot, besides being fun, and as always, from play n go, which continues to prove to be if not the best of the best providers, done very well and also worth the time, very good launch. And the leprechaun theme isnt recently most used, so its a bit original.

I got lucky in the demo version, let's see what real play can bring to me :)

Leprechaun slot in the middle of summer is the best proof that you can expect the unexpected from Play’n GO.