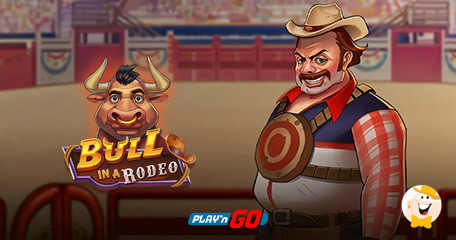 Play’n GO, the most productive online slot provider, is happy to showcase the most recent adventure added to its fast-expanding portfolio. Bringing back one of the most fearsome characters from the previous year, Bull in a Rodeo sees Benny the Bull trying to escape rodeo to freedom.

Spreading across a 3x5 grid, the game displays 20 lines that pay left to right. Filled with a wide variety of features, such as 3 types of Wild symbols and Freedom Spins, this story has massive winning potential.

Will the Dreadful Bull Manage to Escape?

Telling another story of Benny the Bull and his daunting buddies, Bull in a Rodeo by Play’n GO invites the bravest ones to help this gang of bulls plot a bold exit from the rodeo. As soon as the game loads, players are presented with a bullfighter and other interesting themed symbols.

Head of Games at Play’n GO, Charlotte Miliziano commented on the revisited character as follows:

"We pride ourselves on our characters and their development. What’s their next move? Have they made some new friends along the way? These characters provide humorous storylines that players can’t get enough of. I wonder what Benny’s next adventure might be..."

As we hinted earlier, players had the chance to meet this character in one of the previous year’s achievements dubbed Bull in a China Shop. This title bolsters 20 fixed paylines and a wide range of powerful features, quite similar to the ones in the studio’s newest slot.

Wanting to ensure a max level of action, the studio incorporated multiple types of Wilds. To start with, Happy Bull sees Wilds created randomly. Then, there’s Proud Bull which fills the reels with Stacked Wilds as well as Angry Bull, with Multiplier Wilds.

…they activate Freedom Spins. During this mode, every time the Bull hits the reels, players are granted 3 Rodeo Bull Wilds. All of The Bull features in Freedom Spins act the same as they do in the Base Game. So, when the Bull is Happy, 2 to 6 Wilds are added to the reels, whereas Proud Bull opens room for up to 4 Stacked Wilds. This feature can be retriggered on the last spin.

As for the max potential, players can score up to 2,000x the bet.

If you are a fan of slots where farm animals are central characters, there are plenty of fun-filled games in Play’n GO’s catalog for you. Aside from Bill in a Rodeo and Bull in a China Shop, there’s Piggy Bank Farm, a 5-reel, 4-row video slot, with 50 lines paying left to right. This one sees players collecting up to 5,000x total bet depending on the Multipliers.

Miner Donkey Trouble is a 5x7 cascading video slot that doesn’t take place on a farm but does have a farm animal as the star of the game. Animal Madness brings cascades as well, but also a Charge Meter depicted as Sunflower. The cascades grow the Sunflower and activate features, giving consumers the chance to land up to 2,250x their bet.

Compared to Bull in a China, illustrations are done in a different style. Personally, I find them more authentic than the ones in Bull in a Rodeo, but let’s see what this one has to offer.