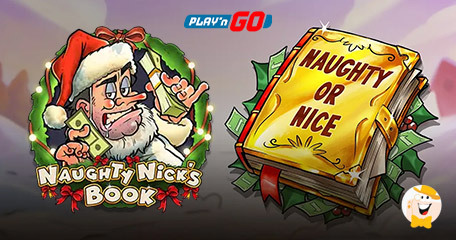 Bite Into the Tasty Treats of Christmas with a Naughty Santa

It has become a tradition for Play’n GO to release new Christmas slot machines for the holidays and this season is no exception. The leading software studio in iGaming is back with Naughty Nick’s Book this time – a slightly different title than one would expect around Noel.

If you want to have a different Christmas experience in 2022 with a hilarious spin on holiday slots, join Naughty Nick and his noisy friends, they will surely deck your halls with fun!

Tis the season to be jolly, and Play’n GO is proudly presenting Naughty Nick’s Book, featuring an unusual selection of uncanny characters for a change. Starting with Naughty Nick, the gang is also complemented by Rude-Olf, Rupert the Rascal and Eric Elf, where each one of them will change the way players think about the game.

Since Saint Nick is expected to come around midnight and deliver gifts, this Christmas title is packed with super unwrapping and exciting features, such as the studio’s innovative complimentary rounds followed by expanding symbols.

Starting with Eric Elf who eagerly sits aside the grid expecting to see some honorary spins, he’ll be more than happy to open the present that hides the sixth reel. During this round, Naughty Nick’s Book will open and pick a symbol at random to make it expand and hopefully give players a bigger potential.

If you want to risk a little and gain a lot, the gamble feature offers you the chance for some Christmas coin-flippin’ where wins can be either doubled or quadrupled.

Over the years, the award-winning supplier of high quality gaming content has created quite a collection of festive games, ranging from Holiday Spirits and Holiday Season to Xmas Joker, Xmas Magic and many others like Merry Xmas.

“The holiday season is by far one of our favourite times of the year and this year, we decided to put a real Play’n GO spin on Christmas slots,” said head of games at the company, Charlotte Miliziano.

This is a version of Santa you’ll never have seen before, added Miliziano, and advised players to immediately put Naughty Nick's Book on their list of favorite holiday games.

After releasing its latest Christmas-themed slot, Play’n GO isn’t going to stop to celebrate the most wonderful time of the year by unveiling its Christmas Slots List. Full of fun, festive and joyous moments, the following line-up is ready to deck the grids with holly, bells and other yuletide merriments…

Beginning with Naughty Nick’s Book which we described above, players are in for some magnificent holiday gifts, followed by the ghosts of Past, Present, and Future in Holiday Spirits.

Step into Scrooge’s shoes and see how poor Ebenezer traveled through time to scare up some good wins.

Next, it’s Merry Xmas, a classic with a big bag full of gifts, Xmas Magic with jackpots, and Xmas Joker, made specifically for the fans of gingerbread pals and candy canes.

Try them all out and have a Merry Christmas!

“the latest fun and festive Christmas slot from Play’n GO”

Play’n GO has the best Xmas slots no doubt about it, it’s just that I’m not into any of that anymore because of the low RTP... the gameplay on the other side is truly incredible!