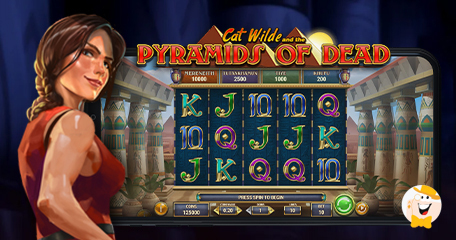 Book of Dead Receives 8th Chapter in the Series

Several months after releasing Cat Wilde and the Lost Chapter, Play’n GO is finally ready to reveal the next couple of pages in a spin-off to the original Book of Dead franchise, called Cat Wilde and the Pyramids of Dead.

Having already traveled to the mythical waters of Atlantis, the ancient Aztec temples, and to the sands of Ancient Egypt, this heroine has plenty of adventures under her belt. This time, she is ready to go on a hunt for a very particular set of treasures and step into the forbidden tombs. Are you up for a new challenge?

A New Twist with Pharaohs and Jackpots

As the studio reveals, its latest follow up to the ‘Dead Series’ is coming out with a few new twists, never before seen in the franchise. There are three different bonus features in Cat Wilde and the Pyramids of Dead, including a powerful expanding wild symbol that is synonymous with the series.

Among other attractions while playing, fans will also notice instant prizes, bonus spins and fixed jackpots, while the maximum potential in this title is capped 10,000x the total stake.

However, the biggest surprise in terms of design and storytelling is the return of the Pharaohs from Rise of Dead (2019) and Cat Wilde and the Lost Chapter, released in February this year. Play’n GO cleverly united characters from its earlier hit titles within the franchise with the jackpot feature, allowing players to participate in a pick and click game after being presented with 12 urns.

There are four pharaohs in the game and they are represented by an urn with their fixed odds at the tops of the reels. A player must click an urn and release the spirit which adds a mark on the urn at the top of the reels.

Releasing three of the same spirit will reveal the prize that the player gets.

Cat Wilde and the Pyramids of Dead also comes with greater spectral animations and a glowing green reel to highlight the landing of the third scatter which helps players enter the spooky world of complimentary spins.

“IP titles as respected as the Dead series and characters like Rich Wilde and Cat Wilde are truly powerful. But with great power comes great responsibility, and opportunity too,“ commented head of games at Play’n GO, Charlotte Miliziano.

Ending June with a ’90s Throwback!

Play’n GO is ending the roster in June by paying tribute to NSYNC and adding it to its music hall of fame.

The latest music collaboration title is called NSYNC Pop, and it is focused on fans of the ‘90s who can finally get their frosted tips and baggy cargos on to dance away the night with Justin, JC, Lance, Joey and Chris onstage.

After going live with rock bands Twisted Sister, KISS, Alice Cooper and many more in their repertoire, Play’n GO have decided to shift their focus to pop in 2022 and bring something new to its loyal fans.

As you start dancing on a 2-3-4-3-2 grid layout, feel the action during honorary spins, expanding reels, Encore Spin and other pop symbols, carrying a special mystery image for even more surprises along the way.

NSYNC’s iconic pop song is playing in the background as you move across the dancefloor, so make it worth your while!

Excellent features and that has become standard when it comes to this franchise, but for me, the theme is nothing new.

One of my favorite characters when it comes to Egyptian mythology and ‘quest’ slots. Hope they make more follow-ups this year!