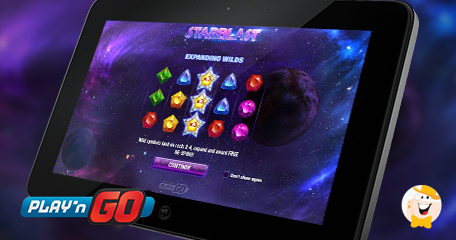 One of the leading casino software specialists, Play'n GO, has released their latest brainchild – a 10-payline, 5x3 video slot, Starblast!

The info on this game provided by the developer is still quite scarce, although we did take a glimpse into it and can confirm that it's a very curious breed of a classic slot variety set in a spacey ambient.

Traditional symbols such as colorful gems, BAR, lucky 7s, and special wild stars occupy the reels that are set against the majesty of purple-blue nebulae. Appropriately alien-sounding electronic ambient music accompanies the gameplay action and makes for a fitting soundtrack.

Starblast has, in fact, THREE different wild symbols, with two of them (the stars) coming with x2 and x3 multipliers.

Wild symbols will only land on the second, third and fourth reels...

...but once they do, they will expand to cover the entire reel and award players with a re-spin. When all three reels get their expanding wild on consecutive spins and 3 re-spins can be obtained, meaning multipliers in re-spins can combine up to x9 multiplier.

A total lack of special features such as bonus spins may make the game unappealing to some, but the high-probability of landing multiple wilds on more than one occasion makes this particular release very much worth players' time.

The supplier debuted Queen's Day Tilt on February 14th. The 3x3 slot has one particular aspect that will find its way to many players' hearts: The Ruler feature, in which The Queen (Wild) decides whether she will appear on the reel after a spin with no win or create more winning opportunities.

...the company received another certification of excellence at the International Gaming Awards where they scooped up the Mobile Product of the Year and Slot Provider of the Year.

“We are committed to being the strongest supplier in regulated markets. This approach is an integral part of our products and operations. We continuously strive to be even better at what we do not only seeing that our products adhere to the strictest standards while providing a great entertainment experience,” and added:

“We have a strong presence in regulated markets, and it’s growing continuously. Our goal is to expand even further in Europe and increase our presence in Latin America. Wherever we go, our partners can be certain to be fully compliant in those markets.”

“multipliers in re-spins can combine up to x9 multiplier”

I can't find Starblast anywhere. It seems that StarBlast came out and soon stopped for some reasons, instead, Play N'Go released a new game with different graphics only, which is Crystal Sun. This game has all the features mentioned above. I don't really like this game because it is too similar with StarBurst.

Play n Go are one of my favorite gaming softwares to play, my favorite game is Grim Muretio and Wizard of Gems but this new game sounds fun I hope it pays as well as the other games for Play n Go. I can't wait to try it and hopefully win big haha :)

Looks cool! Can't wait to try it as i'm a big old-school Starburst fan, and this is kind of what i was looking for, in terms of a sequel (although Netent's own Berryburst and Berryburst Max are also quite amazing, and would count as such) but i love the idea of multiplying wilds..bit of a mix of the 'ole Rhino and Starburst!

Looks cool! Can't wait to try it as i'm a big old-school Starburst fan, and this is kind of what i was looking for, in terms of a sequel (although Netent's own Berryburst and Berryburst Max are also quite amazing, and would count as such) but i love the idea of multiplying wilds..bit of a mix of the 'ole Rhino and Starburst!

Not a very interesting subject or variety, but I guess I will end up trying it.