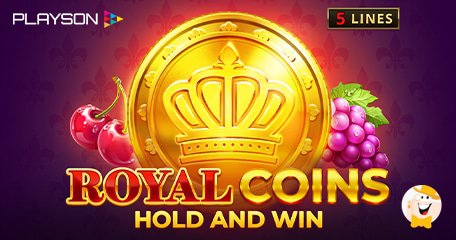 Diamond Wins, Hot Coins and Rich Diamonds have all given us many reasons to be happy; these titles represent the pinnacle of development when it comes to Playson’s Hold & Win series, also known under a different name – Timeless Fruits.

This month, the provider is back with a refreshing newcomer that expands its collection with charm, class and simplicity. The latest edition is called Royal Coins: Hold & Win, and it is going live with all affiliate partners on 26 August, 2021.

As described by the studio, the newest hit in the Timeless Fruit Slots series will charm every avid fan right from the start. The title is designed with classy finishes and simplicity, featuring a 3x3 grid and 5 paylines.

This well-established combination offers an entertaining gaming session for a true admirer of the supplier’s collection, where action depends on wild symbols and a number of other great features.

Players should look out for precious coins that trigger these features and, they are easily spotted – yellow Bonus and Royal Bonus symbols. Since they can be found everywhere across the reels, expect fantastic payouts in the Hold and Win Bonus Mode.

“It is exactly this part of the Royal Bonus feature that makes the entire game so unique and exciting”, said the studio.

On top of all symbols and attractions, Playson included 7s, BAR, bells, plums, oranges, lemons, watermelons, grapes and cherries in 3D, as well as 3 types of in-game jackpots – mini, major and grand.

Meanwhile, bet lines pay if matching symbols appear on the grid from leftmost to rightmost. Here is what you can expect from every symbol and feature in detail:

Buffalo Power Megaways is Out

In the meantime, Playson has announced the launch of another long-anticipated gaming title, called Buffalo Power Megaways.

This installment represents an exciting twist to the provider’s popular hit, Buffalo Power: Hold and Win.

As you already guessed, the mountain peaks act as scatter symbols, providing a minimum of 12 complimentary rounds when appearing in groups of three or more during regular play. It is also possible to reactivate the feature and accumulate more extra spins for the extended winning potential.

“We’re charging into view with a jam-packed new gaming title designed to ramp up the thrills with the Hold and Win Bonus Game on a Megaways™ field, stunning graphics and sounds,” – commented Vsevolod Lapin on the latest blockbuster, head of product at Playson.

Lapin is interested in seeing what players think of the provider’s latest exciting version of the popular title.

Royal Coins looks pretty simple with a 3x3 grid and 5 paylines but, you should check out the paytable and features that the game offers. I think this game promises a lot of fun!

Both games look amazing, but I’m more of a fruit fan myself. Playson kicks a**.