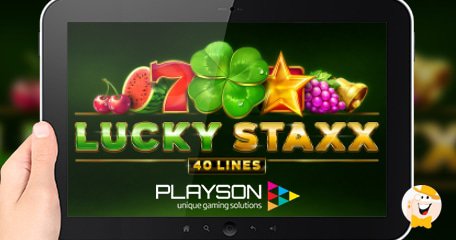 Software developer with unique gaming solutions, Playson, has officially kicked off the winter holiday season by launching another great addition to the portfolio. The supplier has got a perfect present for all its players this December, and it is called – Lucky Staxx 40 Lines.

The game features four-leaf clovers and promises good fun as its main symbols bring streaks of luck and joyous wins to players. Expanding this month’s collection with a co-sequel to Timeless Fruit Slots, will allow enthusiasts and fans to spin another incredible fruit-themed release with a 4x5 grid and 40 bet lines. Since a classical approach to such themes has somehow become the provider’s trademark, most icons on the reels can be found exactly in this form.

As a reminder, previous editions such as Burning Wins, Joker Expand and 40 Joker Staxx also belong to the same genre. Apart from luscious fruits, sevens and golden bells, there are stars icons that act as scatters. The clover stars represent wilds, and if you’re wondering whether this newly launched masterpiece has a lucrative main feature... you’re totally right!

To form big wins for both fruits and wilds, players must activate tall stacks of symbols, but the best part is this: scatter wins are paid separately of paylines.

Launching new releases isn’t the only thing Playson takes pride in. In other words, the group has reached several important supply agreements during the last couple of months, including both operators and software studios. The company’s portfolio spans across a wide network of brands, such as Videoslots, Paf and Betsson Group, offering tables games and roulette offerings as well.

Similarly, the Malta-based casino aggregator showcased at this year’s SiGMA event at stand B73, where its team talked about games, trends, upcoming editions and other landmark suprises in the industry.

A couple of months earlier, in September, Playson entered into an agreement with Casino Barcelona and joined other leading software producers such as Yggdrasil, Quickfire, Red Rake and Pragmatic Play, who also successively signed content arrangements in the previous period.

Until the official teaser for Lucky Staxx 40 Lines is available, take a look at other similar releases from Playson and don’t forget to post a comment below.

“a perfect present for all its players this December”

This looks like it would be a good game to play but unfortunately I am unable to play it because it is not allowed in my Country. Vibrant looking colors and it looks very well designed. Maybe it will be allowed in my country another time. For now I can read about Playson and watch for it in my country one day.

Why isn’t there more news about Playson? They make good games!