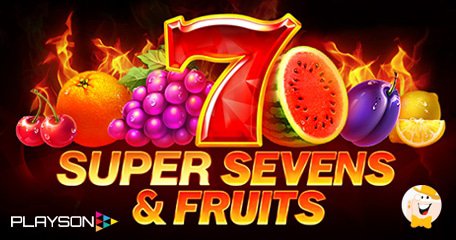 It didn’t take long for Playson to launch a new game after giving us Reel of Fortune with innovative mechanics and complementing its classic fruit series with Super Sevens & Fruits.

Following two important commercial deals earlier in March, signed with White Hat Gaming in Europe and Solbet in Latin America, the provider is back and set to “change the game” with a new hit, Stars and Fruits: Double Hit.

According to the report, this title is the first in line to feature an entirely new and revolutionary mechanic ‘Double Hit’. Its specialty is reflected in two game fields, allowing players to spin across a larger field at the same time.

As a purely advanced feature, designed to answer the demands of new-age slotters, Stars and Fruits: Double Hit is ideally suited to a territory such as Germany, where slots are subject to a minimum spin duration of five seconds.

Once the game starts, you will notice that its exhilarating 3x5 layout appears alongside an identical counterpart. Not only does it trigger separate payouts, to add a fresh level of excitement, but it also boasts a newly-enhanced game mode, meaning that all combinations pay individually from leftmost to rightmost on each grid, except for the special symbols.

To reach some additional thrills, players will have to land Gold Star scatter symbols, capable of paying out irrespective of bet lines and the game field. This means that winnings are granted when up to 10 scatters appear on screen, regardless of where they land.

“We’ve upped the ante on our highly acclaimed gaming suite with this new title, adding a brand-new game field to ramp up the excitement for thrill-seeking players,” explains Vsevolod Lapin, head of product at the studio.

He is confident that the company’s unique and recently published content, such as Stars and Fruits: Double Hit will perform strongly with customers based in Germany due to its thrilling gameplay and compliance-regulated spin duration, one of the top priorities for every provider on the market.

The theoretical RTP of this slot is 95.46% while its math model is based on high volatility. Players can reach an optimal exposure of 5000x total bet, while coin size expands between 20p to $100 per spin.

As mentioned earlier, Playson announced a partnership with Solbet on 16 March, one of LatAm’s highly regarded online operators.

Solbet is part of the Dreams Group, present across 17 locations in Latin America. The operator has integrated a range of hits such as Solar King, Wolf Power: Hold and Win and Legend of Cleopatra: Megaways with many new titles still to come.

By concluding another milestone content deal, the supplier has continued to expand its Latin American footprint, bolstering its growing regional potential in key commercial territories.