Playson Unleashes The Spirit of Egypt Tournament with a €60,000 Prize Pool 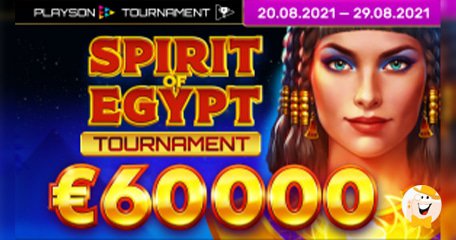 After giving its players a chance to turn their fortunes around on Friday 13th with the Lucky 13th tournament, Playson is back with yet another great announcement right before the weekend – the launch of its latest Hold and Win title – Spirit of Egypt.

To celebrate the occasion, there is an entirely new network tournament on sight, based around the action-packed Egyptian adventure slot.

If you’re an avid participant of Playson’s multiple tournaments over the year, get ready to enter the ancient tombs filled with riches between 20 – 29 August, as the casino software developer has accumulated a huge €60,000 prize pool for the Spirit of Egypt tournament, while the winner is set to take home a ravishing €10,000.

To avoid any confusion, points are calculated round-by-round, where each €1 (or your currency equivalent) bet is equivalent to 100 points. For example, a bet of €0.50 represents 50 points, regardless of whether it was a winning bet or not – cool, right?

Presented on 12 August, 2021 Spirit of Egypt continues the provider’s passionate series about the ancient civilization of the Upper Nile in a 3x5 configuration, featuring a Hold and Win bonus game with merging bonus scarab symbols.

The biggest asset of these items is that they can enlarge to provide truly great winnings in the range of 6000x. When you see Scarab Ladies, know that the stacked wilds are in play and 10 complimentary rounds are activated by each time you land three scatters on the same spin.

Meanwhile, keep in mind that there are also 3 fixed jackpots up for grabs in the Hold & Win feature, ranging from Mini, Major to Grand. They are worth 25x, 250x and 5,000x the stake, and it is even possible to win multiple jackpots during the same bonus game round!

The provider’s massively popular Hold and Win mechanics started with Pearl Beauty Hold and Win back in 2020, but they have expanded to 10 similar titles after their debut.

Playson has also included the Megaways version of Buffalo Power into the development, arming the most of these installments with a solid potential of some 2,000x.

The studio’s latest edition is the first time Playson decided to up their game a bit and increase the exposure up to three times.

Their tournaments are always engaging and interesting and I have a feeling this one’s gonna bring some dough!