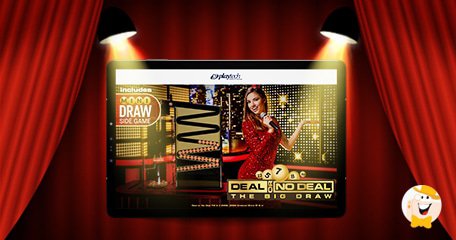 One of the world’s top-trending iGaming brands, Playtech plc, has officially announced the release of Live Deal or No Deal – The Big Draw, the studio’s next live game in the portfolio based on the iconic TV gameshow.

The product will be available as a limited exclusive with a market-leading operator, and its mechanics are built upon one of the most successful gameshow formats of the 21st century, according to the supplier.

At the core of its recreational concept is a bouncing ball game that reanimates all the excitement elements of the show, and Playtech is known for providing high-end entertainment in the sector exactly thanks to long-term partnerships with popular bingo brands and dedicated rooms.

For those who are not familiar with the popular TV show format, Live Deal or No Deal – The Big Draw is based around 16 numbered prize suitcases. There are fifteen numbers on the player’s ticket in total, while the sixteenth suitcase represents the potential reward.

As balls are gradually drawn, the numbers and the prizes are removed from the ticket and the banker’s bar gets filled instead. The banker will make the player his first offer, once there are seven numbers on the bar.

The game ends momentarily if the player accepts the deal. However, there is another scenario included that allows participants to buy five extra balls and continue the game in search of a higher bid.

If the player does not accept a deal and new balls are available, their suitcase will be opened to reveal the prize. Contestants can also opt to increase one of five prizes before the round begins or enter a mini draw side game with prizes based on the first 20 balls drawn.

As specified by the provider, fans of the show will also be able to see a tutorial that provides a short overview of the game and its rules. The video guide is supported with subtitles from a variety of languages to answer the company’s needs on a global scale. Managing director at Playtech Live Casino, Edo Haitin, commented about the studio’s latest portfolio addition and said:

“We’re delighted to be bringing the excitement of one of TV’s most enduring formats to Live. With the addition of the mini draw side game, allowing players to buy multiple tickets with up 6 points of decision making during the game, whether it be to buy more balls or take the bankers offer, Live Deal or No Deal – The Big Draw brings the player a new level of engagement and strategical involvement.”

“For many players, Live play is as much about the experience as it is about gambling, and we’ve seen a growing trend towards gameshow-style formats – which is why we’re so confident Live Deal or No Deal will definitely be a big draw.”

Meanwhile, Playtech announced a historic content distribution agreement with Bet365 and BetMGM in the US, enabling it to provide casino software across Borgata, PartyCasino NJ and BetMGM venues.

“We’re thrilled to be extending our partnership with Playtech through the launch of Live Deal or No Deal – The Big Draw. The in-studio presentation is fantastic and, with the combination of a proven format and innovative elements such as the mini draw, we believe it offers something genuinely unique and entertaining for Live players which aligns with the brand.”

On September 21st, the leading online gaming software supplier announced a new collaboration with the Responsible Gambling Council to promote awareness and research on gambling addiction.

“the release of Live Deal or No Deal – The Big Draw”

i love the tv host games, but only when it comes to online casinos, not a big fan on real life actually... i cant really wait to try this, it looks like one of the best by far and that is why playtech is always on top of casino studios. goodluck to anyone who's going to play this :)

The popularity of TV host games is definitly on the rise and it’s clear that some of the best providers are making vital steps in conquering this market. Evolution Gaming is also one of them, if not the major contributor, releasing a TV gameshow every three months or so... They’re very interesting to watch and participate...

The popularity of TV host games is definitly on the rise and it’s clear that some of the best providers are making vital steps in conquering this market. Evolution Gaming is also one of them, if not the major contributor, releasing a TV gameshow every three months or so... They’re very interesting to watch and participate but one should be careful to avoid addiction.