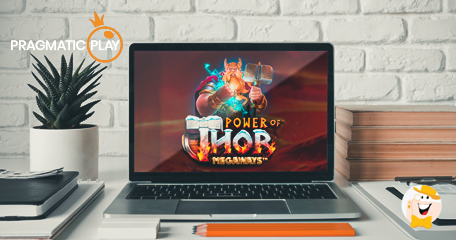 Norse deities, fiercer than ever, are coming in another Viking installment by one of the world’s biggest slot providers, Pragmatic Play.

Power of Thor Megaways is the name of the game and it comes equipped with 117,649 paylines and is centered around the Norse God of Thunder.

The slot features runic symbols and some of the most well-known companions of Thor, such as Loki. The return to player rate is 96.55%.

Power of Thor Megaways, as the name suggests, brings back the Megaways mechanics. The Thor’s hammer will land horizontally on the top row and turn the symbols below into Wilds.

This game contains tumbling wins and the extra spins mode is triggered with four or more Scatter symbols landing on the reels that spell out the name of Thor.

On any spin, up to nine Scatter symbols can land which may trigger 30 extra spins at most.

Before the Bonus Round starts, players have the option to gamble their spins and possibly win more or lose it all. This adds another volatile element to this adventurous game.

Extra Spins Round on Steroids

A progressive multiplier is added during every extra spins round. Each increases the multiplier by 1x throughout the round as more wins and tumbles happen.

Power of Thor Megaways joins other recent additions to this series of games, including Madame Destiny Megaways and The Dog House Megaways.

“Power of Thor Megaways™ is a fantastic new addition to our growing Megaways™ series. With huge win potential in Free Spins, as well as the possibility of receiving over 30 spins in the Bonus Round, the high-volatility title could be one of our most exciting yet.

We consistently look to add innovative titles with engaging themes to our product range and we’re looking forward to seeing how our fans receive our newest game.”

Have a look at the official game preview below!

Most recently, Pragmatic launched operations in Colombia with BetPlay operator.