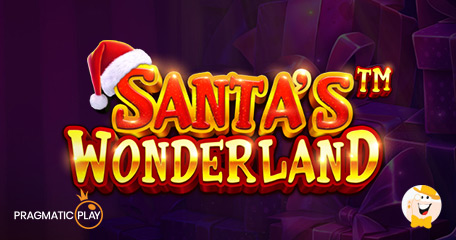 Santa is Back in Town with a Sack Full of Gifts

Following the recent presentations of Super X and Book of Fallen, Pragmatic Play makes a change of direction and brings Christmas earlier on the reels in its latest release – Santa’s Wonderland!

The leading content supplier with up to four new titles a month is raising the levels of excitement earlier this year by throwing in some toys, colored baubles and incredible festive rewards, amounting up to 7500x the stake.

As the holiday season slowly approaches, iGaming providers gleefully launch this year’s iterations of festive slots. Among such projects is the latest title from Pragmatic Play, Santa’s Wonderland, a game packed to the brim with Christmas presents, colored gewgaws and celebratory spirit.

Santa Claus is also part of the package as he comes to town this Christmas to take a prominent role in the provider’s late November release. You can spot Santa on the playboard amongst the colorful symbols right after a few spins, and when he lands, not only will he act as a wild and allow players to substitute for various other symbols, but also connect to form multiple winning combinations with different toys and ornaments.

In addition, Santa’s Wonderland is packed with the Tumble feature, meaning that symbols forming part of a win disappear and allow the ones from above to tumble down and take their place. Players continue to make wins with a new collection of symbols with no cost and the process repeats until there is no winning payline left.

Meanwhile, you will notice five different colored overlays in the game. They are positioned behind the reels to determine which of five special features will be triggered whenever a win occurs above a colored marking. This special highlight provides even more entertainment and festive cheer to the player, making the provider’s festive slot incredibly diverting and pleasant to watch.

Finally, as cluster awards accumulate on the Midnight Riches Meter, you might get a chance at triggering the Midnight Riches feature, which increases the multiplier value each time it’s activated. In certain jurisdictions, where players are willing to buy-in, the game will allow them to purchase the mode for 100x their total stake.

Pragmatic Play has introduced us to its latest slot, Santa’s Wonderland, on 29 November, 2021. The game arrives shortly after Star Pirates Code and Mexican-themed Day of Dead. Among other recent hits are also Cash Bonanza and Bounty Gold, now part of more than 200 HTML5 titles in the supplier’s award-winning portfolio.

“Though we designed the new slot with Christmas festivities in mind, we wanted to include a bunch of exciting mechanics that will allow it to be enjoyed throughout the year,” commented about the game Julian Jarvis, chief executive officer at the Gibraltar-based studio.

He also said that November’s last release offers a truly bespoke experience, set to amuse audiences across the globe in time for the holidays, featuring a unique Midnight Riches feature that rewards players with sizable wins in the range of 7,500x.

On the last day of November, Pragmatic Play surprised the iGaming community by landing a new deal in Brazil only this time with MarjoSports. The industry’s leading content provider will reach three verticals with the Brazilian operator and continue to expand in one of the most prosperous markets in the world.

Alongside its full collection of slots, including the top-performing John Hunter series and many Megaways offerings, MarjoSports customers will also be able to enjoy an array of live casino titles, such as the Mega series, as well as regional titles Andar Bahar and Dragon Tiger.

“packed with the Tumble feature”

So I thought I'd for sure love this game. Read all about before release, I'm a huge fan of Gems Bonanza which is a sister slot in nearly all ways. I do not however like this game at all. Hundreds of spins at $1 CAD each over the course of several different days, times of day and sessions and I'm just not seeing the returns...

So I thought I'd for sure love this game. Read all about before release, I'm a huge fan of Gems Bonanza which is a sister slot in nearly all ways. I do not however like this game at all. Hundreds of spins at $1 CAD each over the course of several different days, times of day and sessions and I'm just not seeing the returns or the excitement during the bonus round like you do on Gems Bonanza. hoping to see it improve!

A fine new Christmas slot from Pragmatic Play. The players are going to love it!

Christmas themes always look so interesting and magical! The features are great. Good luck to all! :)

This is by far the best Santa-themed slot this year. It has all the elements of fun, tumbling reels, cutsy animations, entertaining features and solid payout potential. Players will enjoy it during the holiday season, that’s for sure.