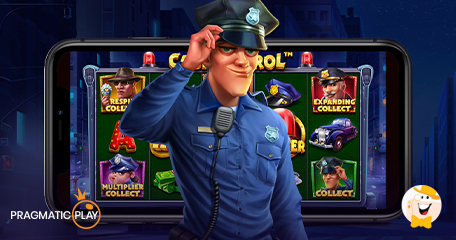 Popular Provider Gets Down to Street Levels to Establish Justice

Four days after inviting its players on a trip to Ancient Egypt in a new prehistoric slot release, Queen of Gods, Pragmatic Play has returned to bring justice on the reels and launch a thrilling new crime-fighting adventure, Cash Patrol.

The studio’s latest heist-themed and action packed slot is featuring a fearless police force chasing down adventurous robbers all over town, so get ready for some dirty money, fast cars, handcuffs, and donut-style symbols, as sirens whirr on a fast-paced, 5x3 grid with money collects, expanding wilds, extra collects, and huge wins!

As you join Cash Patrol and take a tour of Pragmatic Play’s latest cops & robbers video slot, expect to see a lot of handcuffs, money, police cars and other related symbols on the screen! Traditional icons are also part of the chase, of course, they are designed in a tasty donut style, while badges act as wilds and substitute for other images during play.

One of the main highlights of this game is Pragmatic Play’s extraordinary Money Collect mechanic, where players can get a bigger cash value. Meanwhile, the police officers act as the collect symbols with different modifiers, attached at the right time to give huge win potential if the crook is apprehended.

Furthermore, there is also the Extra Credit Collect, which adds an additional cash value to the total sum. Thanks to the Multiplier Collect, this feature can quickly turn an arrest into a big win, while the Expanding Collect sees money icons engulf an entire reel with new random values added.

The Respin Collect triggers a new spin to add even more chances of a big reward, as stated by the studio.

To enter complimentary rounds and let the mechanics take over, you will have to land three scatters on the same spin. During this stage, each money value that lands is gathered in a bonus pot. At the end of the round, a giant money symbol fills the reels one to four, and if a Collect lands on reel five, the value of the bonus pot is paid out.

He also stated that the game’s detailed visuals, fun theme, huge win potential and additional modifiers will make it a successful title and help players reach new excitement levels with every new arrest.

Last week, the provider has also signed a new partnership with SGA to extend its reach within the Latin American market.

The deal will help Pragmatic Play integrate its award-winning slot titles such as Zombie Carnival and Wild West Gold Megaways with the operator, while other fan favorites will be added in the upcoming days, including Fruit Party.

As agreed, Pragmatic Play will also begin providing its extensive live casino titles, including traditional games such as Blackjack, Baccarat and Mega Wheel.

“Pragmatic Play returns to bring justice on the reels”

Sounds entertaining, looking forward to playing the new slot. Branching out to different markets come with risks but I'm sure the rewards will be worth it.

Colorful, imaginative theme and there are so many features, I will try it.

Interesting name for the slot, I think Pragmatic Play did a good job with this, the game is fun and the players will like it.

Hah, great new cops and robbers game, will give it a go!!!!

Wow, didn't expect anything less from them! Another amazing release! I'll definitely try it! :)