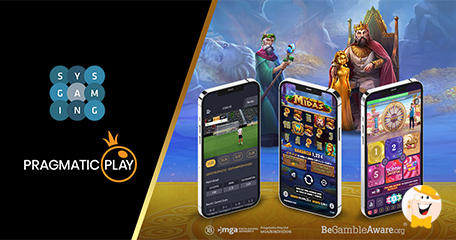 Pragmatic Play, a Malta-based casino software developer, has in a short time established itself as one of the leading brands in the online gambling industry.

The company is known for its diverse portfolio, which features some of the most famous online slots, live casino, and bingo games as well as virtual sports products.

It has also sealed numerous important collaborations that have enabled the provider to expand its business roots much more than expected.

Although it is present in multiple major markets, Pragmatic will not give up until it becomes a convincing leader!

It has once again decided to conquer South America, as evidenced by this amazing news!

Pragmatic announced that it has joined forces with another ever-growing operator to bring its content to this region!

As stated in the agreement, it will bring as many as three of its verticals and plenty of engaging and outstanding products to South America.

Punters who decide to check out the Sysgaming platform will be able to indulge in their favorite form of entertainment with an impressive range of online slots and check out hits such as multi award-winning Gates of Olympus™, as well as recently launched fan-favorite releases including Striking Hot 5™ and Down the Rails™ and much more!

For lovers of live casino content, the companies have prepared well-known Pragmatic Play's classics such as Roulette and Blackjack as well as two modern-style releases Sweet Bonanza CandyLand and Mega Wheel.

Also, virtual sports products will also decorate the games section of the operator, and Football, Horse Racing, and Greyhound Racing will be available to players.

Victor Arias, Vice President of Latin American Operations at Pragmatic Play, said: "We're thrilled to grow in South America with an established brand like Sysgaming, helping us to establish a strong foothold in the territory. We expect players to enjoy the variety of award-winning content that we are known for, with this impressive deal allowing us to reach more players than ever before.

Fernando Ribeiro at Sysgaming, said: "Our recently established partnership with Pragmatic Play truly demonstrates our status as an up-and-coming brand within South America. Our customers will have access to three different verticals from the provider, with each offering a different way of entertainment, so we couldn’t be happier.”

“Football, Horse Racing, and Greyhound Racing will be available to players.”

Great news and it is great to see Pragmatic play expanding into new markets, their content is really high quality!

Adding Football, Horse Racing, and Greyhound Racing will improve players' entertainment for sure.

It seems Pragmatic Play plan to spread all over the globe! Great work!

I heard about this platform, and I think that partnering with Pragmatic Play was a smart move.