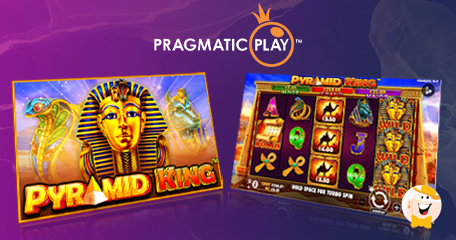 July is at our doorstep and it’s time to recap some of this month’s top releases from Pragmatic Play, a leading provider of game content to the iGaming industry. The studio has released a collection of pretty laidback slots throughout June, including 777 Ultra Burn, Starz Megaways and Three Star Fortune, only to round it off with Pyramid King, a brand-new Egyptian-themed adventure.

Players will once again visit the deserts of Ancient Egypt and sweat for big wins on a 25 ways-to-win grid by triggering extra spins and combining high value symbols with wilds, such as Ankh, Ring, Cobra and Anubis masks. During complimentary rounds, a random symbol is selected to expand on the board and set off even bigger rewards.

Unlike the producer’s earlier releases inspired by the ancient Nile civilization, Egyptian Fortunes, Ancient Egypt Classic, John Hunter and the Book of Tut or John Hunter and the Scarab Queen, this title brings a couple of tricks along, including three respins and a grand jackpot.

The camel acts as a money symbol here, with six or more activating three respins, according to the description. These images can also remain sticky and bring new respins for every new money symbol that emerges on the playboard. At the end of the stage, symbols pay out massive wins, but if every single icon is a camel, players will activate a skyrocketing grand prize.

“Pyramid King takes a fun, recognisable theme and adds a Pragmatic Play twist with both Respin and Free Spin features. Its action-packed gameplay and mini-jackpots offer players an exciting quest to take the riches of the fearsome King back home with them after a successful adventure.”

Pyramid King is played out in a standard configuration, meaning that customers will hunt their big wins on a 5×3 layout with very radiant colors and a hypnotizing soundtrack in the background. Hitting the money symbols and winning rich Respin Rounds can potentially lead to 1000x bet jackpots. By initiating extra spins, a random special expanding symbol will top up all awards, so pack your bags, adventurers!

Throughout July, the supplier will launch two new remarkable releases, Drago – Jewels of Fortune and Street Racer, scheduled for July 9th and 25th.

The month of June has also seen some important content distribution deals between Pragmatic Play and major online brands. Royal Panda was among the first operators to gain full access to the supplier’s extensive Live Casino offering, with ATG and Caxino soon to follow.

These agreements provided customers in multiple growing jurisdictions with admission to some of the industry’s top-performing games, such as Wolf Gold, Great Rhino and Bronco Spirit, an April release with medium volatility and 75 ways to win.

However, perhaps the most noteworthy arrangement in June refers to the newest brand by Rootz, Caxino. It represents the second partnership between the supplier and a fast-growing casino operator, since Pragmatic already went live on Wildz, back in October 2019.

“a collection of pretty laidback slots throughout June”

Well, Pyramid King is a combination of Book of Dead and Pragmatic Play Cash bonus. The paylines are 25 lines with much smaller wins than Book of Dead. Both Free spins and Cash Bonus are not easy to get, so that overall this game pays out less than expected. I think that I would play other games.

Not complaining here, love egyptian themed slots. Have been able to play this at socialtournaments and kind of liked it. Graphics were not that good, but the very familiar free spins functions was nice (once more :) ). Pragmatic keeps rising in my eyes, mainly coz i get to play them all at ST. And heres waiting for the...

Not complaining here, love egyptian themed slots. Have been able to play this at socialtournaments and kind of liked it. Graphics were not that good, but the very familiar free spins functions was nice (once more :) ). Pragmatic keeps rising in my eyes, mainly coz i get to play them all at ST. And heres waiting for the next egypt slot.

Same old style, features and gameplay, typical for Pragmatic. It looks good but not their finest work. I put my bet on the upcoming two titles, especially Drago.