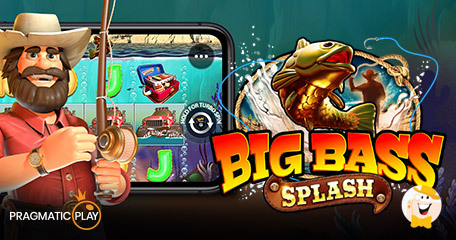 Two and a half years after releasing one of its greatest slot hits to date, Pragmatic Play is back and ready to catch more fortune in another Big Bass sequel.

This time, the provider and leading iGaming multi-product supplier, is releasing the fifth sequel to its immensely popular and widespread franchise Big Bass, calling it Big Bass Splash.

Pack up some fishing rods, it’s time to return to the shoreline!

If you’re in love with the franchise from Pragmatic Play and know just about everything in relation to its earlier releases, get ready to pump up your angler ambition and reel in the biggest fish yet!

As you once again set out for open sea in Big Bass Splash, the studio’s fifth follow up since December 2020, you will be welcomed by the iconic set of symbols, only this time, their design comes with an updated art style. Apart from the tackle, rods, and bait, you will notice a 5x3 reel layout supported with just 10 paylines, but there are some high-paying monster truck symbols that return instant cash for catching fish too.

Landing two scatters during the base game will trigger a nudge meaning that the reels containing a scatter will move down one place without respinning. This feature will give you an additional opportunity to hit the third scatter and unlock complimentary spins – a highlight where you can use a hook mechanic to pull a reel up to reveal it.

Before this stage begins, the game will summon up to five modifiers that can be applied to the bonus round by catching fish. These modifiers can bring further rewards in the form of additional fisherman, fish, dynamite, hooks, and bazookas, or a quick promotion to level two, as well as two extra honorary spins at the start and for every additional retrigger!

Next, it’s all about the wild fisherman symbol, which when added to the reels, can collect all instant cash prizes. These contain fish with four fishermen, and they are required to unlock a 10-spin retrigger with increasing multipliers. As a result, you could unlock the slot’s maximum win potential of 5,000x so do your very best!

In the meantime, the provider has also published hit games such as Cash Patrol, Queen of Gods, and Fortune of Giza.

“Building upon one of our standout franchises whilst delivering new features and mechanics as seen in Big Bass Splash is a thrilling opportunity to subvert players’ expectations and revitalise a fan favourite series,” commented Yossi Barzely, chief business development officer at Pragmatic Play.

On 27 June, Pragmatic Play has confirmed another important partnership in Latin America with Bingo ao Vivo, a leading operator in Brazil.

As a result of this agreement, the platform will gain access to the provider’s prominent products and launch slots like Eye of Cleopatra, Chicken Chase and fan favorite classics like the above mentioned Big Bass Bonanza.

“get ready to pump up your angler ambition”

This game and its sequels have become famous, and I can't wait to try this one as well.

Wow fifth already, it’s like only yesterday I found out about the first game... congrats!