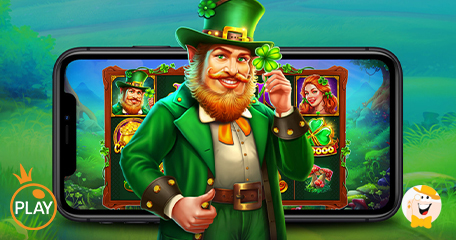 Pragmatic Play, a top-tier developer of casino games, has prepared everything for the journey through the rainbow to reveal a pot of riches. The new game from the brand is Clover Gold™ and players are invited to join the experience and get the most out of it.

The new release from the brand features a 5×3 layout full of mushrooms, leprechauns, and beer. Players are tasked to match winning symbols across 20 paylines if they want to trigger a win. In addition, you will also reveal instant cash prize clover symbols and you should land them on reel number five to get the award.

Collect symbols can appear with extra features attached that can trigger a selection of modifiers. This involves adding extra cash to the clovers before gathering the win, multiplying their wins, expanding the number of clovers, or triggering a respin.

Going forward with the experience, you need to hit three to activate the bonus spins round. However, players will initially unlock eight bonus spins. You will also see a progressive meter divided into three sections. If you hit four collect elements, you will fill one section of the meter while releasing eight extra spins and an enhancing multiplier. The latter will be added to any acquired wins.

Clover Gold’s™ game is yet another release from Pragmatic Paly arriving hot on the heels of other games such as Eye of Cleopatra™, Chicken Chase™, and Drill That Gold™. The company is known for featuring more than 200 games with striking features, innovative gameplay, and mobile compatibility.

“Clover Gold™ will build upon a fan favorite theme of leprechauns, whilst introducing augmented features previously warmly received throughout our portfolio.

“Our talented team has created a fun, colorful, and immersive game that has the ability to award our players a huge 5,000x max win, we are all excited to see the reception Clover Gold™ receives upon release.”

Another Update from the Company

Pragmatic Play has just unveiled that it has entered a deal with a fast-increasing company from Africa, Hollywoodbets. This deal will allow the brand to feature its full slot suite, including recent hits, Barn Festival™, and blockbuster releases Sweet Bonanza™, John Hunter™, Big Bass Bonanza™, and Wolf Gold™ via the South African brand. Pragmatic Play will also introduce its full selection of scratch card titles, providing engaging content to users.

“match the winning symbols across 20 paylines”