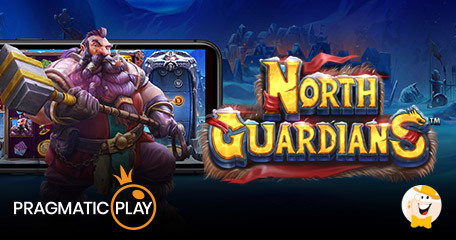 It’s a time of adventures over at Pragmatic Play, and the provider’s roster keeps on growing at an unprecedented rate thanks to diverse themes, ideas, concepts and innovation!

After joining forces with some of the most recognizable brands in the industry last month, the studio is ready to once again pay tribute to Norse mythology, and take players right into the blizzard in its latest release with Vikings, called North Guardians.

From Viking Runes to Level ups and Wild Wheels

If you played Gates of Valhalla or Book of Vikings from Pragmatic Play, one of the busiest content providers to the iGaming industry when it comes to creating slots and other branded casino products, get ready for an adventure far into the frozen wastelands of Scandinavia, where Vikings must battle their way through a blizzard to loot huge wins up to a maximum of 5,000x!

North Guardians is played across a 5x5 reel set supported by 50 paylines and yes, it is also full of iconic Viking symbols such as battle axes, horns, shields and coins, as well as two Norse characters.

As players try to find their way in the midst of a blizzard, they may notice that two halves of a Viking rune move across the reels each spin. If they land on the same space, they create a full rune that unlocks the wild wheel, which is capable of placing multiple wilds on the game grid in a random pattern when stopped.

However, this number can be upgraded by landing on the level up position, granting another rotation of the wheel – but there can be only five increasing levels in total.

To enter bonus play with honorary spins, you must land three scatter symbols in the base game. During this stage, the wheel is triggered on every turn while landing on the level up feature awards extra spins.

On top of that, increasing the wild wheel’s level also unlocks more of these special symbols, ultimately leading you to the maximum exposure of 5,000x the stake.

North Guardians makes a touchdown after a series of recent hits, such as Spirit of Adventure, Clover Gold, and Eye of Cleopatra. There are over 200 titles in Pragmatic Play’s award-winning games portfolio so far, and the number continues to grow each month.

As Barzely put it, North Guardians is capable of awarding players huge wins up to 5,000x their stake ($0.50 to $100 a spin), so they should prepare for a real clash with the innovative wild wheel system and RTP of 96.38%.

If you’re not familiar with the supplier’s last month’s roster, here’s quick recap:

Have fun exploring them all and see you soon!

Nordic themes are always very popular due to funny looking characters and usually a nice set of features. This slot is amazing!