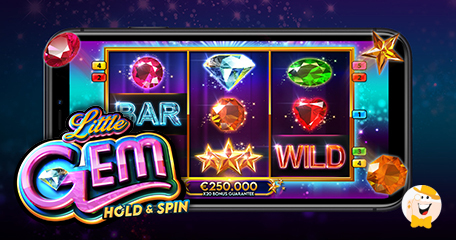 Pragmatic Play, one of the most productive online content developers invites players to explore the world of shimmer in its latest release Little Gem slot. Set against the shiny background, the 3x3 grid accommodates the most colorful precious stones, 5 win lines and the RTP of 96.70%.

The newest work of art comes shortly after a strategic deal with Versus, the sports betting and online casino brand operating under Orenes Group. With this agreement, the provider’s award-winning products gained better visibility in the Spanish market.

…which serves as a substitute for all the icons except for two special symbols. Speaking of, one of them is the gold coin symbol, which appears in the middle reel only. The other is the silver coin icon, which grants a random multiplier ranging from 1x to 20x the total bet.

“Little Gem™ provides players with a blend of simple gameplay and rewarding multipliers that effortlessly complement each other. The visually striking theme delivers an engaging environment as users try and reach the bonus feature, and we expect to see players return to the dazzling experience time and time again.”

May Brings a Wealth of Games

Little Gem™ is not the only game exhibited in May. So far, the studio unveiled three releases, with two more expected to hit the shelves in days to come.

Fire Strike 2™ was the first one presented…

…challenging players to collect the fire strike wild symbols and unlock cash prizes and juicy jackpot. A week later, the catalog was enhanced with Goblin Heist PowerNudge™, a 3x5 slot filled with bombs, keys, maps, and goblins, of course. Should a punter collect enough multiplier coins, a massive reward of 4,000x max win is unlocked.

Taking place in a rural American town, The Great Stick-Up™, a crime-themed slot filled with high volatility is just the thing for fans of detective stories. Depending on the number of Scatters that land on the reels, the payout ranges from 2x to up to 100x the total bet.

Regarding the upcoming releases…

…Cleocatra is scheduled to go live on May 26, 2022, while Wild West Gold Megaways is to be introduced on May 30, 2022. Both installments bring widely popular themes and a selection of top-performing features.

Take a closer look at the Little Gem slot by Pragmatic Play, and let us know how you like the features and visuals. Hit the comments section below to share your thoughts with us and gamble responsibly!

When this game first came out I did fairly well with it on as little as five cents bets.... But over time it seems to have gotten tighter. I can spin fifty times and not hit at all. So it's now on my don't play again list :(

Shiny and sparkly as they said, the features are ok, why not give it a try.

Truth be told, it doesn’t seem anything special…I think Hold and Respin save the day here!