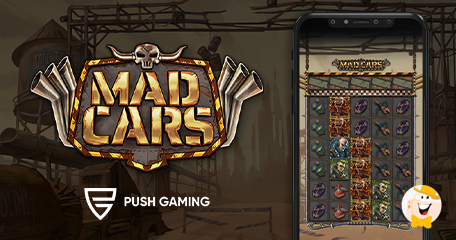 Buckle Up, Because the Wildest Ride Is About to Begin!

Continuing to surprise consumers with fun-filled online casino games, B2B gaming supplier Push Gaming has announced the launch of one more slot adventure. Dubbed Mad Cars, the most recent addition to the catalog takes players on a post-apocalyptic race car derby, challenging them to find their way to big wins.

Equally powerful as the visuals are the features incorporated in the game, bringing plenty of action on the reels. Instant Prize Car Symbols, Scatter Car Symbols, Boost Reel and Mad Bonus Features are just some of the authentic elements which open room for solid winning opportunities.

Live across the majority of Europe’s key regulated markets, Push Gaming will exhibit its enticing adventure in multiple casinos, among which LeoVegas, Entain, 888, Casumo, and more.

As soon as Mad Cars by Push Gaming is launched, players find themselves in a futuristic wasteland filled with traffic cones, wrenches, and wheels. Along with the remaining survivors of the world, who act as the high-paying symbols of the game, consumers are on the mission to win the race and lay their hands on solid winnings.

“I’m incredibly proud of our team’s work in creating such a transformative and unique post-apocalyptic designed title. These elements coupled with a max win of 25,000x means that we are particularly excited to see player’s reaction to this highly immersive game.”

Paying attention to other releases in the provider’s portfolio…

… such as Jammin’ Jars, Fat Drac, Fat Banker, or Fat Rabbit, one may notice that the light-hearted and fun themes are the most dominant. Yet, this very title demonstrates the studio’s ability to create titles with an utterly different storyline, confirming that their games are meant for the global audience, regardless of tastes and preferences.

When it comes to Boost Reel…

…it reveals Boost Symbols for each spin. Those include Multipliers, Gas, Multiplier & Gas Combo, Survivor, or Blank. Each of them influences the gameplay in a different way, adding more twists and turns to the story.

Activated when the Scatter Car exceeds the top row, Mad Bonus Feature starts with 7 free spins and 5 Instant Prize Car icons. Aside from that, it reveals a new set of symbols that can appear on the Boost Reel- Line Up, Persistent Payer, Persistent Collector, Persistent Payer & Collector Combo.

Finally, there's Mad Race Feature as well, initiated randomly after the last spin in the abovementioned Bonus. While this mode is on, all Instant Prize Car symbols move to the top row and pay out regardless of their position.

“plenty of action on the reels”

Car fans will at least have a look at this game. Hope to trigger the Mad race feature along with the Mad bonus feature and that these will boost the winnings.

Way to go, Push Gaming, you did an excellent job with all these features!