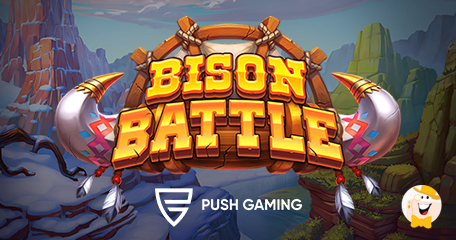 If you liked Fire Hopper from December 2021, wait until you see this month’s clash of ferocious beasts as B2B gaming supplier Push Gaming whisks you off to the plains of North America in all new Bison Battle!

The studio’s latest title is a testament to its diverse range of games, but it also ups the ante with high volatility, ranging RTP between 94.19% to 96.40%, bonus buy, 50,000x maximum win cap and action-packed play style.

Unleashing a Stampede of 50,000x Wins

Get ready to encounter raging bison across the Great Plains, as Push Gaming returns this month with a raging land-based casino favorite, Bison Battle. This hurdling title awakens the fascinating culture of native North Americans in breathtaking canyons, where beasts are ready to charge at any moment!

There are three main features in this slot – Bison Clash, Ice Park and Green Valley.

The first one is triggered when the Red Bison with an instant prize or a multiplier appears on the same row. During this stage, the bison come together on the reels and clash to multiply wins.

If a Green Bison meets a Red Bison, at least eight free spins and unlimited multipliers are added to the counter on a beautiful green valley, hence the name of the feature. Finally, when Red and Blue Bison clash, players are taken to a chilling ice park (the third feature) where three free spins are carried out with sticky instant prizes and multipliers.

Bison Battle is also packed with Bonus Buy, allowing players to purchase entrance into the free spin rounds. Apart from the bison that roam the plains in this slot game, you will also notice eagles, cougars and wolves, who prowl the reels to complement the Native American environment.

“Our team has done a fine job with Bison Battle – they’ve had great fun putting together a game that is snappy and endlessly entertaining from the Base Game through to the second screen-features.”

On a different note, Bison Battle is incredibly similar to Beasts of Fire, released one month earlier by Play’n GO but it offers a completely different and one-of-a-kind experience.

Here’s the official teaser trailer if you want to compare the two.

The studio’s latest release comes on the back of a hugely successful year for Push Gaming. Not only has it picked up crowns at the Casino Beats Game Developer Awards, but it also received Game of the Year accolade at the 2021 SiGMA Europe Awards and multiple shortlist appearances at the 2021 EGR and SBC Awards.

Push Gaming is now live across Europe’s key regulated markets with some of the leading brands in the industry, such as Casumo, LeoVegas, Entain, The Rank Group. Its roadmap will see entry into further global sectors with top-ranking partners throughout 2022.

It’s incredible how these competitive titles start appearing on the market all of a sudden in numbers, as if the providers agree in secret what to release… the recent buffalo series is quite astonishing though.