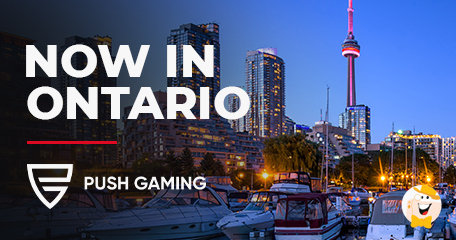 Award-winning Provider from London Continues to Expand in North America

In recent weeks, Push Gaming has continued its global expansion by celebrating European growth with NetBet and Coolbet, but now, the award-winning software development studio from London is pushing things further by launching a selection of player-first games in the regulated Ontario market.

The upcoming rollout will see the developer bring its high quality games to the central Canadian province, since it acquired a license from the Alcohol and Gaming Commission of Ontario (AGCO) last week.

Entering the recently opened jurisdiction of Ontario after Play’n GO, Microgaming, Nolimit City, Pariplay, Wizard Games, Armadillo Studios and other renowned companies, is a significant step for Push Gaming, which has continued to grow exponentially in the previous period thanks to numerous partnerships with multiple leading operators.

The British supplier is also preparing to reveal a new line of partnerships in the next few months.

Known as one of Europe’s most exciting player-first game providers, Push Gaming is hoping to reach an extensive fanbase across the exciting and newly regulated North American market.

Among the company’s most recent releases are Big Bamboo and Bison Battle, as well as classics in the style of Jammin’ Jars and Razor Shark. According to the studio, its high-quality content should secure fast provision to new operators in Canada, such as SIA, Royal Panda, 888, Unibet and so on.

“We’ve long had our sights set on North America and our registration in Ontario is the first step in realising our ambitions for this key region.”

She added that both Canada and the U.S. have a unique land-based player legacy, which the studio knows how to appreciate and implement in its games to receive the same reaction in Ontario and across its neighboring country.

Push Gaming also nurtures the player-first gaming experience that is essential for becoming one of the best software providers in the world.

Established in 2010, the studio has earned a reputable place in some of Europe’s key regulated markets thanks to collaborating with LeoVegas, Entain, Casumo, Svenska Spel, PaddyPowerBetfair, and other leading brands.

After Fat Santa, Fat Rabbit, and Fat Drac, we are in for a big surprise with a 1920s-themed game where players are invited to explore a life of opulence in front of the iconic Manhattan skyline.

Fat Banker will be available to all partners across regulated markets while this 50 payline title is also home to symbols like top hats and cigars, including the banker’s wife and dog.

“a significant step for Push Gaming”

Great move for Push Gaming! Ontario is such a diverse market with a wide variety of people with multi-ethnic backgrounds. Many gamblers in Ontario through my experience of living there. Especially of Asian ethnicity.

One more great provider launching in the province, awesome! The Ontario market is developing really fast!!