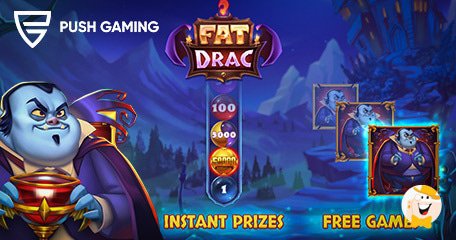 B2B supplier of casino games, Push Gaming, continues to enlarge its suite with premium releases. The brand has just added the latest Fat slot in the series, Fat Drac.

After releasing Fat Rabbit and Fat Santa, the next iteration of the popular series presents a unique twist on a standard theme, allowing bettors to visit the vampire’s castle and look for spooky awards.

The latest title from Push Gaming appears with a 5x5 reel matrix and 40 winning lines. As part of the main game, players are looking for the Fat Drac symbol, which represents both Reveal and a Scatter element. Once it lands, it can potentially reveal a paying or a bat element, with the latter causing the bat to fly to the prize bubble, awarding customers with the attached value. When the Fat Drac element lands with one or more goblets available on the reels, the free games round is activated.

Instant prize bubbles can be seen in both the main game and extra gaming round with regular multipliers reaching up to 50,000. It is possible to see up to seven prize bubbles and they nudge by one place with every spin. A Fat Bat can appear any time while displaying the collection of all prize bubbles. Players should also have a look at a meter that follows Drac’s progress as he drinks more goblets with every analogous symbol. Every time a level ramps up, bonus spins are awarded.

“We’re looking forward to the latest release in our Fat series. Fat Drac is another game with our typical awesome production values, and has an even fatter selection of engaging features!

“In time for Halloween, but relevant any time of year, Fat Drac is full of random rumbles and mischievous bats which add a real depth to the theme and overall gameplay.”

Another Project by the Brand

Push Gaming has just unveiled another partnership agreement with White Hat Gaming. This deal will see the brand featuring its full content portfolio via the premium platform. Some of the included titles will be Booty Bay, Mount Magmas, and Jammin’ Jars 2. The former release is one of the most evocative games which has become a hit among international players. Meanwhile, Push Gaming continues to enhance its presence in Europe while securing agreements with top-tier companies such as Pragmatic Solutions and SkillOnNet.

“The latest title from Push Gaming”

Love the character of Fat Drac :) Can't wait to spin the reels on this one :)

This title will be player favorite in the next weeks…