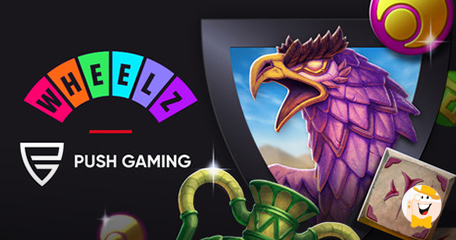 Following the latest announcement about Summer launch for Jammin’ Jars 2, a UK-based software developer, Push Gaming, has revealed a breakthrough agreement with Wheelz, one of the newest casino brands in the iGaming sector.

As a reminder, Wheelz is the third betting platform under the hood of a fast-growing operator – Rootz. It is advertised by David Hasselhoff and hosts thousands of games from all major divisions such as table, live dealer and slots. The latest line-up of products will be benefited by Push Gaming, an up-and-coming provider of highly entertaining casino offerings.

Under the terms of this agreement, player-favorite titles like Land of Zenith, Wheel of Wonders as well as the upcoming Dinopolis will become available in the following weeks. The supplier’s portfolio offers a one of a kind experience thanks to the “player first” principle, the developer’s marketing strategy and commitment to working with top iGaming partners.

The industry’s recently launched online casino operates under an MGA licence and it runs on popularity of a Hollywood icon David Hasselfhoff. The star of Baywatch and the most watched man on TV, according to the Guinness World Record Book, will also lend his name to one of Wheelz’s gamified loyalty scheme features, called Hoff’s Extra Wheel.

The brand ambassador pops-up randomly during play on any game to bring more excitement to the player and initiate a spin of the Wheel.

As a special bonus for players enjoying the new game, Push Gaming has managed to secure 10 extra spins on Wheel of Wonders for every player who signs up with Wheelz.

“While we can already count Rootz as a valued partner with its other operations, Wheelz is a brand that aligns nicely with our own ambitions,” commented Christine Parkhill, head of account management at Push Gaming.

She also implied that the casino’s gamified loyalty scheme and intuitive UI focuses mainly on players, which tells a lot about how the studio positions itself on the market. According to Parkhill, Wheelz is exactly the right kind of gaming site to utilize the aggregator’s unique game selection.

As stated by Tony Kjaldstorm, chief commercial officer at Rootz, the company’s latest brand Wheelz is a genuine and state-of-the-art platform that implies a slick, seamless operation offering. Its portfolio already enlists some of the best iGaming providers and basically hosts market-leading titles, which is why Push was the next logical choice.

Kjaldstorm revealed that the team looks forward to seeing how players would react to more engagement from a new game selection.

“Wheelz with Push Gaming is everything that a modern casino should offer,” concluded the CCO.

“Push Gaming, has revealed a breakthrough agreement with Wheelz”

Good luck to them both with their cooperation. :)

Great choice! There are so many underrated suppliers on the market, I really don’t understand why. Is it poor advertising, low marketing exposure or us?