Queen of the Crystal Rays the Latest Release from Microgaming, Developed By The Crazy Tooth Studio 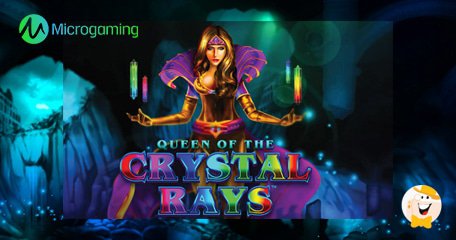 Microgaming presents Queen of the Crystal Rays – its latest slot with the fantasy theme. Exploring an enchanting world of this exciting game is now available only to the provider’s operators.

As one of the most esteemed iGaming providers, it is constantly enhancing the playing experience with each new release. This one certainly isn’t the exception to that rule, due to its thrilling gameplay and abundance of features.

Crazy Tooth Studio is the developer behind this slot, exclusively made for Microgaming operators. Players will have an opportunity to get acquainted with dashing new six by four-reel gameplay featuring Any Adjacent Wins™, up to 50 lines and many interesting features that can help players to get to major wins.

… this game comes with winning potential of more than 2,500x the initial bet.

Impressions of the slot Makers

… but also very beneficial for players who can enjoy innovative releases as the result of their cooperation, and their latest slot is the true example of that.

James Buchanan, Director of Global Operations at Microgaming, comments on the new slot:

“Following the release of Arctic Valor, Crazy Tooth Studio’s fantasy filled title is sure to receive a warm reception, as players discover an enchanted world immersed in colorful visuals and engaging features. The Queen Of The Crystal Rays feature builds on the excitement, offering an expanded reel set with crystal rays populating wilds and multipliers along their path, and offering players a rewarding adventure.”

“We can’t wait for players to experience the magic of Queen Of The Crystal Rays. The game combines an entrancing soundtrack and striking graphics to create an immersive mystic world. The captivating Queen character, colorful crystal ray blasts, and unique gameplay make for a magical gaming experience. We look forward to adding more exclusive games to Microgaming’s diverse and innovative collection in the near future.”

Quite an Interesting Theme and Visuals

The storyline is set in the caverns of the forgotten temple, revealing the magical world full of wonders.

As Crazy Tooth’s releases, this one is also showcasing superb graphic and design.

… while this game has a magical theme, its visual representation is in retro style. Quite an unusual combination, but not without a certain appeal.

In fact, that is adding to the uniqueness of this innovative game.

Illuminated by glowing lights, a mixture of brightly colored symbols, including the Queen herself, gilded artifacts, and vibrant gems, set against an enchanted and ancient backdrop are making this release very good looking.

Besides its striking visuals, the magical realm of the new Microgaming release is luring players with its complimentary spins, the Crystal Ray Feature, and the Queen Of The Crystal Rays Bonus.

The Queen unleashes her mystical powers randomly on any spin during the Crystal Ray feature. The intensity of the gameplay increases as the rays dynamically change the path, bouncing off crystal reflectors spinning by.

When the spinning cycle of the reels come to a stop, symbols can turn into wilds or 2x multipliers, creating even bigger opportunities for high wins. Scatters also have a major role in the game since they activate the Bonus feature with four additional rounds.

According to the features, visuals, and gameplay…

… it seems like the latest slot can even be a bigger hit than the first product of the partnership between Microgaming and Crazy Tooth.

The new title is now available exclusively to Microgaming operators.

“The storyline is set in the caverns of the forgotten temple”

I wish there were more USA casinos that offered more of the available providers such as microgaming. The rgt and rival casinos need to broaden their library or lose their customers such as myself. I'd love to play this game. My search is on.

I’m eager to try out the new release and see if it can match the brilliant Arctic Valor.