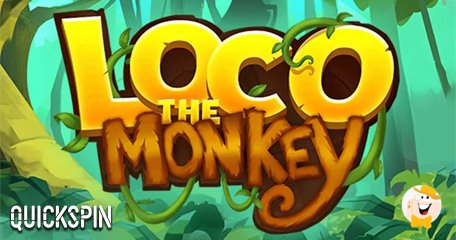 In case you have ever wondered what it would be like to be a monkey for a day, the award-winning provider from Sweden gives you the unique chance to find out. Presented as the tropical adventure with high volatility and solid exposure, Loco the Monkey online slot by Quickspin fills the reels with jungle-tastic vibes.

Inspired by Miss Kitty Gold, a successful land-based one-armed bandit, the upcoming title hosts a selection of powerful features and vibrantly-painted symbols. As far as the team says, this release is expected to go live on January 12th.

Would you like to take a closer look at Loco the Monkey slot and find out more about the features of the Quickspin’s upcoming adventure? Keep reading!

From the very first steps made into this special place where Loco lives, punters encounter the juiciest selection of exotic plants. There’s also an abundance of delicious pineapples, bananas, mangos, and blueberries.

…players shall spot a crashed car. How did it get there, you may wonder? It was one of those ordinary days for the joyful ape who was driving to the beach to collect his daily portion of bananas. Suddenly, a huge bird flew next by and stole them from the passenger seat.

He started chasing the feathery thief and somehow failed to notice that the road had vanished. The car landed in the tropical forest, which became a new home for Loco.

It’s All about Monkeys!

Structured as a 4×5 grid, the title brings 50 lines, a whole collection of monkey-themed features and the chance to score more than 6,829x bet.

One of the features is More Monkey! Respins…

… which appears when a punter gets four or more Wild Symbols on the reels in a single base game spin. While this mode is on, the triggering Wilds stay in their places while reels 2, 3, 4, and 5 continue to rotate.

Any subsequent Wilds that appear stay in position and the feature is active until no new Wilds hit the reels. When the mode ends, the win is evaluated.

The next one is Monkey Frenzy! Extra Spins…

…which is initiated when a punter scores 3 Bonus Scatters. It awards 10 complimentary rotations. While this mode is active, all Wilds stay locked. Any Wild which appears on the locked Wild boosts it by one. Wild Symbols can have a maximum multiplier of 3.

In case 3 Bonus Scatters appear in a single round, they award 5 additional spins. Bonus Scatter symbols can only land on reels 1, 2, and 3. Locked Wilds supersede any other icon. At the end of each rotation, a line is evaluated.

How about you catch a glimpse of the jungle-tastic atmosphere? Take a look at the official Loco the Monkey slot trailer and share your impressions with us!

As of today (December 31, 2020), Flash Player will no longer be supported, which is why Quickspin decided to discontinue a specific number of slots that run on this software. This studio was one of the first companies to react and optimize its products.

The majority of popular video slots from the creator’s portfolio have already been converted into HTML5. However, Titan Thunder, Epic Journey, Jewel Blast, Royal Frog, Sugar Trail, Firestorm as well as Three Musketeers will go down in history.

Age restricted video, but you can watch Youtube without any problems Loco the Monkey looks like the game I want to play. I really like the sticky wilds bonus system. After gameplay video I think Quickspin at the beginning of the new year release a game that will be a very popular hit.

This studio really has top-notch artists, I’m thrilled with the colors they use!