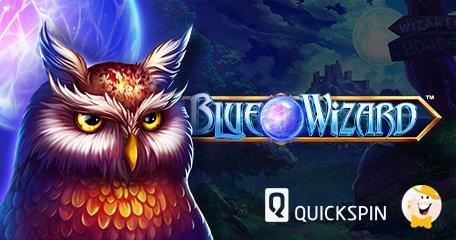 If you’re familiar with Quickspin’s last month rollout, featuring Wild Harlequin and Reno 7s, get ready for two more exciting titles in the pipeline, scheduled to launch throughout November before the grand finale on December 1st.

This date is saved for the studio’s latest holiday inspired game – Spinions X-Mas Party, a follow-up to the fun-filled 25 lines game with cute and lively characters enjoying a great summer party.

The top-rated Swedish provider and inventor of innovative video slots for real money online gaming, such as Big Bad Wolf and Golden Glyph 2, is bringing a nail-biting quest to Egypt in Book of Duat on November 9th and a chance to solve the mysteries of magical forests in Blue Wizard Fire Blaze Classics, set to go live on November 23rd.

Both titles are packed with magnificent rewards and game design based on stunning graphics, including a great deal of style when it comes to Pick & Click, as well as other thrilling hallmarks like expanding symbols, free spins and multipliers.

Anna the Explorer and 4 Jackpot Tiers

We know her from Ark of Mystery, released in October 2018, where she simply won our hearts by finding a way through an ancient Egyptian legend and taking on the curses of ancient Pharaohs to unlock lost treasures.

Anna the Explorer is back this November in Quickspin’s latest expansion of the series, Book of Duat, set to go live on Tuesday, 9th. This time she is geared up for another cliff-hanging quest, as everyone’s favorite heroine returns to ancient Egypt in search of a valuable relic.

However, to enter the magnificent and long-forgotten tomb with glimmering gold, she must confront Anubis, the God of Death, and also avoid getting swallowed up by Sobek, the God of Crocodiles.

According to Quickspin, Book of Duat offers a thrilling gaming experience, based on free spins with a picker screen, expanding symbols, and a retrigger feature. The game plays out on 5 reels with 10 lines and a twist – when 3 or more wilds land anywhere on the screen, players get 4 extra spins.

On top of that, they also acquire 3, 6, or 12 picks respectively, plus a single expanding symbol and a multiplier of 1x.

In certain jurisdictions, players will have an opportunity to enter The Buy Feature and purchase 3, 4, or 5 wilds to start the feature by paying 150x, 500x, or 1600x bet.

Two weeks later, on Tuesday, November 23rd, players can follow the path to a magical forest and be spellbound by mysterious secrets in Blue Wizard: Fire Blaze Classics.

This release comes in a familiar 5x3 setup with 30 paylines, followed by high volatility and modern game mechanics. Among the main attractions are free spins with a retrigger feature and generous wilds, as well as a Fire Blaze Respin with a jackpot that boasts 4 tiers: Mini, Minor, Major, and Grand.

Originally released by Rarestone in 2019, this title has been hugely popular across many markets.

Meanwhile, the Swedish provider of data driven game design and stunning casino games will start the next calendar year with Cash Truck on January 11th, Warp Wreckers on February 8th, and Highstreet Heist, sometime in March.

“Anna the Explorer is back”

I can't believe they have the update when the first releases should be launched exactly at the beginning of 2022! It's amazing, keep up the great work Quickspin :)

We didn't expect anything less from Quickspin, they are up to the challenge like always! :)

Woh, haven’t heard about these guys for some time, but I like their games, especially the classic, Big Bad Wolf. It’s even better with megaways but Quickspin’s content has improved a LOT in the meantime. Now I wonder what the games in 2022 will be like. Share a thought, anyone?