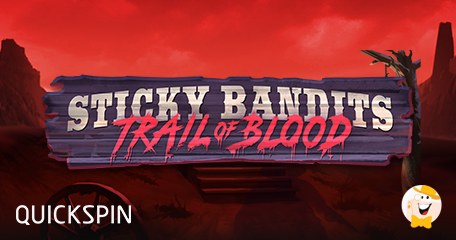 Quickspin, a multi-licensed developer of cutting-edge online casino games goes live with Sticky Bandits Trail of Blood, the fourth installment in the popular “Sticky Bandits” collection. Described as the most volatile release in the franchise, this adventure, which was launched on August 9, follows Tex Tallonis on his quest for justice.

Tex was the sheriff’s deputy until he discovered that people in charge were using the town as their personal ATM. While trying to bring them to justice, he earned some powerful enemies and even lost his family. A year went by, and Tex returned to the town, determined to avenge the killing of his beloved ones.

The Wildest Set of Wilds

Spreading across the 5 reels, the game features 10 lines that pay from leftmost to right. Medium paying symbols include a revolver, knife, brass knuckles, and fire bomb, while A, K, Q, and J represent the low-value ones.

Just like its predecessors, Sticky Bandits Trail of Blood by Quickspin accommodates a variety of rewarding symbols, with five different types of Wilds being the most significant ones. One type of Wild can appear per reel, but they all work the same way.

During the base game…

Also, the number of Wild symbols determines how many additional spins a player will receive. When 3 Wilds land anywhere, they award 10 spins, while 4 Wilds grant 12 spins. Should 5 Wilds land, a player is given 14 free spins.

On top of that, there’s the Buy Feature option, which takes players directly to Revenge Free Spins. Depending on the size of the bet, 3 or 4 Wilds will be triggered, determining how big the return to player percentage will be. Speaking of, the RTP ranges from 87% to 96%.

Described as one of the strongest collections Quickspin has produced so far, the franchise encompasses 4 releases. Aside from the signature feature, Sticky Wild, which represents the trademark of the series, every title is characterized by solid narrative, amazing visuals, and atmospheric sound effects.

Still ranked among the top 10 most played releases…

... the original Sticky Bandits takes players to the canyons of Wild West, challenging them to help Sticky Bandits rob a runaway train. Presented in 2019, Sticky Bandits: Wild Return sees a trio of desperadoes making a mess in a saloon. There’s an old slot machine inside the game, equipped with win multipliers of 500x.

Two years later, in 2021, the provider launched Sticky Bandits 3 Most Wanted with 5 fierce women acting as bandits. These fearless ladies are determined to break into the safe full of cash. Aside from acting as the main characters of the game, Cowgirls represent the Sticky Wilds. The max exposure goes all the way to 22,000x bet.

Which Sticky Bandits release is your favorite one? Have you had the chance to check out the newest addition to the collection? Let us know in the comments section below!

“the most volatile release in the franchise”

Oh, great news. I love Quickspin's series of this slot. Hope the last one "Sticky Bandits" will make me huge wins as well as previous at those casinos where rtp for Quickspin is not less than 94 percents.

I hope Quickspin will continue to work on the “Sticky Bandits” collection, as the story is developing in quite an interesting direction.