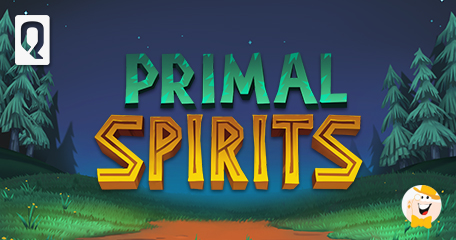 Are you ready to go deep in the heartland of Native America? Quickspin is already back with a new slot release for the month of October and it’s taking you to the moonlit indigo blue sky where Thunder Bird cries out to summon Spirit Animals.

Give it up for Primal Spirits and immerse yourself in the sacred rituals of enchanted nature to reconnect with Mother Earth and get rewarded with untold riches.

It’s a 5×3 nature-oriented slot with 25 pay lines whose marvelous artwork connects its mechanics in perfect harmony. The game features tumbling reels, symbol upgrades, buy bonus (not available in all jurisdictions), and growing multipliers.

Most importantly, the multipliers are progressive in this level and do not reset between spins!

In addition to these attractions, players can activate the buy feature. They will have to pay 150x the bet to get complimentary spins with 3 or more scatter symbols, so better think twice before opting in.

Raven Rising out in November

Next month, all eyes are turned towards Viking revival 2.0. One of the studio’s popular genres will get an update, called Raven Rising. Quickspin will take players in this game on a journey through Ragnarök, a mythological event filled with intense battles and Norse gods.

“When we were brainstorming ideas, we realised we’ve never made a Viking game – and we’re a Swedish company! Naturally, this had to be rectified,” said Bjarne Grönnevik, producer.

Raven Rising plays out on a 3x5 grid with a tumbling mechanism and 20 ways to win. The upcoming title will feature a progressive multiplier, Bonus Buy and, of course, the powerful extra spins stage.

You can get 3 or more Raven Scatter symbols to enter the Ragnarök bonus. It comes with 7, 10, and 15 honorary spins, respectively.

It will also have three well-designed math models to suit every market, ranging from 87% to 94% and 96% RTP.

“a new slot release for the month of October”

This is something different and fresh for Quickspin, but little reminded me of Piter and Sons. It leans to towards their style at first glance.

I am excited to try this game. I'm a big fan of Scandinavia, including Sweden, so that will contribute to the overall experience.

I love the comment that they made when discussing their last game "Raven Rising". It made me laugh that they acknowledged that they were Swedes that never made a Viking game! haha

I'm loving the art style of the slot, can't wait to try it out

Glad they’re back to making some serious slot machines, these titles look promising...