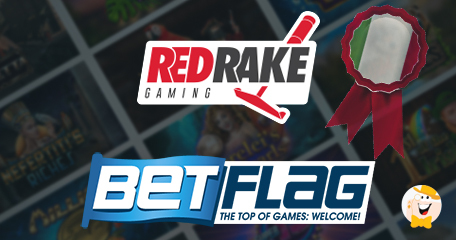 Red Rake Gaming, one of online gaming industry’s most well-known game developers, has signed a new content deal with BetFlag to deliver a selection of top-performing slots to Italian operators.

In less than nine years since its inception in 2012, BetFlag has become one of the most popular operators and bookmakers in Italy.

A Bevvy of Titles

…and that includes titles like Super15Stars - a record-breaking slot that mixes bonus rounds and feature games from all the Super series of games that have already found success in the Italian market.

Some more titles from Red Rake’s suite of games include Million 777 with its million paylines, The Asp of Cleopatra, 1st of the Irish and Parrot Bay.

This new partnership only strengthens the developer’s presence in the Italian market. The engaging content that is also packed with features has won them a large pool of clients in this country as they become one of player-favorites among Italian players.

“Over the past year we have continued to expand our footprint across the regulated market gaming space with Italy being one of our biggest growth markets. We are delighted to partner with BetFlag who have been prominent in the market for many years, which in turn highlights how well our content resonates with the Italian market. We look forward to being a part of BetFlag’s continued success in the market and look forward to working closely with the BetFlag team.”

His counterpart at BetFlag, Domenico Galizia, added that every week, his brand’s offer is constantly expanding, offering all customers new and enjoyable gaming experiences. He said that the brand is excited about the collaboration with RRG and looks forward to achieving important success goals with them.

“one of the most popular operators and bookmakers in Italy”

Glad to see that Italian players now can try Red Rake's games. One of my favorites is Parrot Bay :)