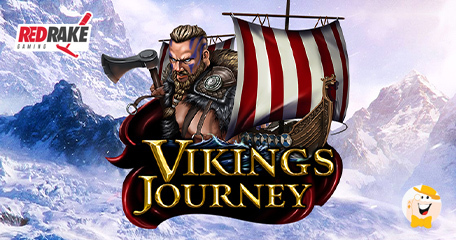 If you followed in the footsteps of Lucky Adam this month, get ready for the second slot release by Red Rake Gaming for August, called Vikings Journey.

This time, the provider is transporting players to an epic battle between Kings and Vikings on a spectacular and larger-than-life 5x4 grid, filled with 178 win lines.

A Sack Full of King’s Coins

If you’re a fan of Nordic mythology, a world where the seas were ruled by the fearless Viking warriors, prepare to seize some new lands and ransack the treasures of powerful kings.

Once you step aboard the ship with Red Rake Gaming, you will start a real daily battle with these dangerous warriors! Their only mission is to defeat the King and collect more wild symbols, but also to fill the coin chests in a fun minigame, where they can multiply some wins.

Pay special attention to the Viking symbol in this slot as it represents the wild. The substituting image moves from reel 5 to reel 1, generating a respin on each movement. When the first reel is reached, the spin is over.

Next, it’s all about landing 3 or more King symbols as they trigger respins of all other symbols on the board. During this exciting round with smashing animations, the Viking symbol will attack any King on sight, leaving wilds in its path.

In addition, if you reach the King’s Coins minigame by filling the progress bar on the side, you will also start a bonus level with 3 fixed coins and 3 complimentary spins.

The most important thing during this attraction is to pay particular attention to the Viking Multiplier symbol. It can multiply the value of the coins, and make the final win much bigger.

Vikings Journey was released on 25 August with all Red Rake Gaming operators. Just like Lucky Adam, it too will be available on the tournament tool.

If you always opt for Red Rake Gaming when joining a casino, we hope you know how to bolster the overall player experience.

Ever since it launched in May 2020, the industry’s most popular real-time tournament feature has boosted popular content beyond expectations!

Its biggest advantage is allowing partners to seamlessly set up progressive slot tournaments across all Red Rake titles. However, there is an optional seeding feature of future tournaments unique to the market too.

Meanwhile, players can turn their spins into prizes and even track results through a real-time data feed. This gamification layer is designed to further engage players and enhance the overall player experience.

The tournament tool is also capable of bringing additional incentives while enhancing player retention and Red Rake’s partner marketing goals. It has the ability to be customized with recurring tournament options and a unique seeding functionality with easy to configure options.

Check out the latest release Vikings Journey today and have fun with the tool!

I love Viking-themed slots, this one looks fun. I'm sure players will enjoy it.

Always in the mood for a great Viking slot! This looks awesome, thanks!