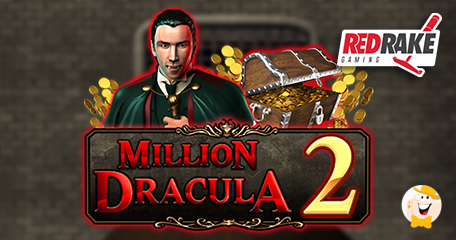 One and a half years later, the specialist casino games provider from Spain, Red Rake Gaming, has continued its terrifying and exciting franchise with one million different ways to win by releasing Million Dracula 2, a sequel to one of the provider’s most popular video slot to date.

If you’re already familiar with ways to enter Dracula’s fortress and win everything you find in there, get ready for a new, exciting 6x10 video slot where one must climb to the very top of the castle in order to find a maximum of 10,000 the stake!

Building up More Excitement with a Minigame!

After achieving huge success on the iGaming market in 2020 by releasing a new breed of slots with Million Dracula, Spain’s most innovative online casino game provider, Red Rake Gaming, has returned to present its latest game for this year – Million Dracula 2.

It follows the last month’s O’Bryan’s Funland, but continues a totally different franchise with 1 million different ways to win. The provider’s long-expected sequel offers all the same features from the previous game, only this time there is a fun minigame where players can win Dracula’s hidden treasure.

Nonetheless, entering Dracula’s castle will require from players to gradually lift the bars as they obtain wins. The higher the bars are lifted, the more rows will be revealed, meaning that the grid will expand from 3x6 reels to a maximum of 6x10. At this point, the grid is reset and shows only the three initial rows, but begins to lift again as wins are obtained!

The Dracula symbol is wild and replaces all other icons, but the Bonus symbol cannot be substituted.

Taking a shot at the game’s biggest highlight, the Dracula’s Treasure minigame, begins when the accumulator is filled with the treasure chests. This round starts with 4 holy waters where each grants a row with direct wins. More holy waters allow players to stay in the game which ends when they run out or when players make it to the final row, where they finally obtain the treasure.

As a special treat, there are cups with the bonus symbol that launch free spins and change the setting to Dracula’s lair. One must obtain 3 cups to earn 8 complimentary rounds, while 4 cups trigger 12 spins and both 5 or 6 cups grant 16 extra spins. During this feature, 4 rows will be revealed automatically while the rest remains hidden behind a mysterious curtain that is lifted two rows at a time as the player makes wins.

Live After a Brief Exclusivity Period

Million Dracula 2 was released on 23 December, 2021. The game was launched exclusively with several Red Rake Gaming operators ten days earlier, so there are already many players enjoying the provider’s sequel.

This fantastic slot game works with the Red Rake Gaming tournament tool, offering active players an even more exciting and gaming experience. Its math model is based on high volatility, while the theoretical RTP is 95.3%; according to the studio, hit frequency is estimated at 24.5 percent while the coin size expands from $0.20 to only $15 a spin.

The trailer is available on the official streaming channel if you want to see more.

“a fun minigame where players can win Dracula’s hidden treasure”

It is a decent sequel to the previous game. Red rake did a good job.

Slightly better than the first version, the graphic is great, and a million ways to win makes every spin exciting.

Great news! These themes always look so exciting and tempting! The features are great! Good luck and have fun LCB'ers! :)

The game is tempting. I will definitely try it out! ;)

I was expecting to see another Xmas slot from this provider, but this is certainly a nice surprise and something different to play arond the holidays. They could’ve implemented more new features, not sure if a minigame will cut it and do the trick, but considering the overall success of Million Dracula, players will know...

I was expecting to see another Xmas slot from this provider, but this is certainly a nice surprise and something different to play arond the holidays. They could’ve implemented more new features, not sure if a minigame will cut it and do the trick, but considering the overall success of Million Dracula, players will know what to expect in base play at least.