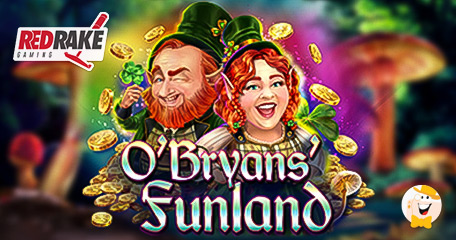 Spanish Developer is Back with a New Four-Leaf Clover Game

The month of November has already marked two important dates for Red Rake Gaming; the leading content provider from Spain has partnered with Hub88 at the beginning of the month and visited SiGMA a week later.

Then, on November 25th, the up-and-coming Spanish developer released a new video slot – O’ Bryan’s Funland featuring a 5x6 reel set with 50 paylines in normal mode, and up to 5x10 reels with 100 paylines during the Falling Ryan bonus.

In a way, the studio’s latest slot machine is a sequel to an earlier hit from Red Rake Gaming, called Ryan O’ Bryan and the Celtic Fairies. It welcomes all players to the land of fun, where the Irish magic of leprechauns turns the impossible into reality. The game is quite colorful, full of features and free spins, packed with different playing options for the best results.

Among the funniest attractions is Falling Ryan, where players see how Bryan the leprechaun falls down the reels with a cute grin on his face, making the reels expand to 10.

Meanwhile, you will also encounter the Rainbow Pot and Ryan Wilds in this video slot from Red Rake, helping you to land horizontal wins (wilds stop at a random position). If the Rainbow Pot symbols appear as part of this combination, they launch the Pot of Gold Coins feature, enabling the Rainbow Pot Wild symbols to transform into coins and grant additional wins.

Take a look at the preview here:

Finally, to initiate the free spins feature, players must land 3, 4 or 5 bonus scatter symbols onto the reels. Depending on their number, the game will provide either 8, 12 or 20 complimentary rounds, respectively. There is a series of features over 3 spins during this mode, designed to keep the fun going: it includes multipliers, wilds, winning coins, winning wilds, wild reels and wild fairies.

One of the most outstanding elements of this video slot is its soundtrack: a joyful and lively melody that transports you to Ireland’s forests and making you feel like you’re on a magical adventure.

O’ Bryans’ Funland is part of a growing leprechaun-themed franchise developed by Red Rake Gaming. You can also find 1st of the Irish in its catalog of 40+ titles, translated in 22 languages and available in 100+ currencies.

It went live on 25 November, allowing all Red Rake Gaming affiliate operators to include it into the library along with a new bespoke tournament tool and replay mode.

Before visiting SiGMA 2021 and reaching a new partnership with Hub88 to increase its global footprint, Red Rake Gaming made a deal with Sisal.es to distribute an entire suite of top-performing casino games across its online operation in the country.

As true leaders in the iGaming industry with over 70 years of experience across lottery, betting and gaming machines markets, the operator is now dedicating itself primarily towards online gaming services.

The partnership will allow Sisal.es to offer a catalog of sought-after games across the developing online gaming sector in the future.

“packed with different playing options for the best results”

This game immediately caught my attention. I think it's worth trying.

I like the waterfall effects along with this smiling leprechaun and the pots filled out with coins. Overall, an attractive design with more attractive bonus features, this is why it should be tested out :)

Nice addition to the portfolio, Red Rake surely knows how to get the job done. They could’ve added a bonus round to break the standard model of playing but it will have to do... oh well, maybe they’ll make a sequel in March before St. Patrick’s Day.