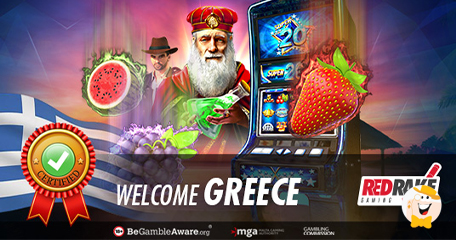 Provider Continues to Expand and Extends Footprint in Greece

Five days after rolling out its latest slot release, Hot and Win, the industry’s in-demand content developer, Red Rake Gaming, is delighted to announce entry to the regulated market of Greece.

Greece is among the fast-developing sectors in iGaming, with many operators and software aggregators joining in the previous period. On that note, the territory has always provided high potential for Red Rake Gaming to expand, as numerous market leaders are constantly driven to its products thanks to the high demand from players.

The gaming license now solidifies the studio’s commitment towards Greek operators and players, allowing it to connect with more operators in the region.

As announced, Red Rake Gaming has been granted a license by the Hellenic Gaming Commission (HGC) on 31 August. Thanks to the reception of A2 Greek license, the provider will continue to supply its content to operators around the country and expand with more partners in the growing market.

The company’s broad selection of top performing titles such as Alchemy Ways, Flamingo Paradise, Fruits ‘n Jars and more will be made instantly available to Greek licensed operators, including its record-breaking Super Series.

This collection consists of Super 12 Stars, Super 15 Stars and the latest release in the series, Super 20 Stars. We recently published an article about its non-stop, action-packed tempo that combines a minigame and bonus rounds from all predecessors to deliver another dimension to this high performing game genre, so take a look.

Other popular titles from the studio’s diverse library will also go live, including Alchemy Ways with one million ways to win, Max Dangerous and the Lost Relics, Tommy Gun’s Vendetta and more. The upcoming title, Ways of the Samurai, is also destined to become a top performing release across Red Rake Gaming’s network.

On a side note, the aggregator has also announced that it will continue to build the portfolio of games for the market with localized approach. Greek players will be taken into consideration throughout the development process, said the studio.

Continuous expansion into regulated markets is one of the main goals of Red Rake Gaming. The company’s latest entry to Argentina represents another great opportunity to further its reach worldwide, complementing a new market admission to Greece.

“Greece has always been a very strong market for our content, demonstrated through our extensive client portfolio in the market,” explains Nick Barr about the expansion, managing director for Red Rake Malta.

Barr has also commented that the company’s regulated market reach will continue to grow through Q4 2021 and Q1 2022 with more exciting markets lining up. The studio is proud of its strong performance in the marketplace and looks forward to delivering the best content for the Greek players, concludes the managing director.

Ways of the Samurai in the Pipeline

The provider’s next big hit, Ways of the Samurai, is ready to launch in the upcoming days. It is based on Samurai warriors and Japanese feudal castles, where players must find their treasures on a 5x3 reel set followed by 50 ways to win.

There are three main features such as the Wild Samurai, Way of the Samurai where Lucky Castle symbols accumulate on reels 3, 4 and 5, and the complimentary spins mode with 15 rounds.

Stay tuned for the official release!

“Red Rake Gaming, is delighted to announce entry to the regulated market of Greece.”

I am sure that Red Rake will be successful in Greece!

Congrats, RRG deserves a place on the market, they’re one of my favorite providers!