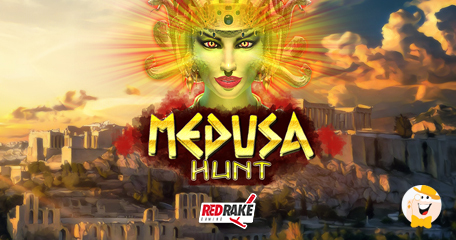 If you’re eagerly looking out for new Red Rake Gaming slots, get ready to be transported to ancient Greece in this month’s second release from the established provider with offices in Malta and Spain.

After Lady Forest, a video slot with a million ways to win, a magic mini game and a free spins feature, the studio returns with a refreshing roster for February and launches a new and spectacular 5x3 arcade inspired by an ancient Greek myth.

While Medusa may try to hypnotize you with snakes and prevent you from triggering impressive multipliers, you could up the ante with sticky wins in regular play and during free spins, so read carefully and learn how to outsmart her…

Sticky Wins and a Continuous Respin

As you embark on a new quest from ancient Greek mythology, dating back to the Archaic period in the 6th century BC or even before, you will notice some pretty amazing artwork from Red Rake Gaming, featuring, of course, the dreaded snake charmer, Medusa.

She delivers incredible wins that can be multiplied by up to x10, but the most impressive feature of this video slot comes in the form of sticky wins – whenever you obtain a win, they are fixed in place and launch a respin!

During this highlight, every new symbol that makes up or increase a win will be fixed in place and trigger a new respin, making this process indefinite.

The Medusa Hunt symbol will act as a wild and step in for all regular symbols to complete a combo, but it cannot replace the bonus symbol, whatsoever.

Getting into the free spins round will require you to obtain 3 bonus symbols, instantly awarding 10 complimentary spins. During this feature, the wild symbol is fixed in place on the second reel. There is also an improved version of the multiplier panel to help you trigger bigger winning amounts.

Medusa Hunt was released on 24 February with all Red Rake Gaming operators, but according to the provider, it is also available on the tournament tool alongside other games.

Here’s a quick intro if you want to see more:

Earlier this month, we saw one more spectacular release from Red Rake Gaming, dubbed Lady Forest. It has a million ways to win, a mini game and free spins, including special symbols and multipliers.

The game was released on 10 February, and it brings to life a magic waterfall in a wonderful enchanted forest where a beautiful elf is preparing magic potions with incredible secrets. You must accumulate potions in the side panel with each spin to enter the Magic Forest mini game. This stage has 6 potions and 15 boxes to reveal.

In addition, if you line up 5 or more respins on the same spin, the game awards 10 extra rounds. When this feature kicks off, a special symbol appears randomly and multiplies all wins in view.

The upcoming title from Red Rake Gaming is called Guardian of Ra and it is scheduled for launch in March.

“a new and spectacular 5x3 arcade”

Well, the game looks okay, not bad. I actually prefer colorful themes, but who knows, let's try it first!

I m a fan of Greek mythology but I don't like this slot, a very disappointing graphic and has few features.

These guys know how to make a game interesting. Nice job