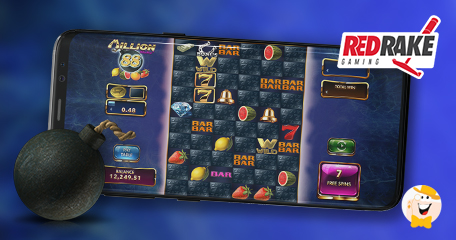 Following the recent entry to the Netherlands and confirmed attendance at this year’s SiGMA Europe, Red Rake Gaming expands the popular Million777 franchise by launching a new game in the series, Million 88.

The latest follow-up is packed with 1 million different ways to win and boasts the same incredible features like its precursor, including bombs for additional explosive wins!

An Upgraded Version of Million 777

The next aspiring slot in the series with one million ways to win is a real bomb, according to Red Rake, whose key symbol can explode when present on the grid and simultaneously insert extra icons that replace 3 different areas: around the bomb, throughout the column and the row.

Nonetheless, the producer of Million 88 has obviously decided to rely on an old saying “Don’t’ fix it if it works” while recreating one of its greatest hits to date, meaning that not many things are different; the latest game in the series is packed with all the best features from Million 777, such as:

Perhaps the greatest feature of all, The M Gold symbol, is also on board, and it is capable of triggering the exciting Frenzy feature that awards incredible prizes such as instant free spins, multipliers or the thrilling Frenzy 7s card minigame.

Among other attractions worth mentioning are also The Scatter 7 Gold and Silver symbols that multiply the win by x100 or x200, respectively.

To make it clear, the M Silver symbol stays fixed in place when it appears, turning into a wild and triggering a respin in the other reels.

Finally, during free spins, the bonus, wild, money or scatter 7 gold symbols are fixed in place and reward spectacular prizes!

Released on 28 October, Million 88 makes a perfect combination of new features with all the classic Million 777 features. Players can find this game with all Red Rake Gaming affiliate casinos, but the provider isn’t hiding the fact that it will soon be available on the developer’s well-known tournament platform, sparking off even more excitement in the weeks to come.

At the end of October, Red Rake Gaming has managed to expand market share in Spain by partnering with Sisal, the Spanish division. This agreement will allow the provider to distribute its high-end and innovative suite of top-ranking casino games in the country, where Sisal Group operates across several divisions, such as lottery, betting and gaming machines.

As stated, the recent rollout will include popular titles as well as the Super Series, while the studio’s “1 million ways to win” genre that already dominates the charts in the Spanish market will launch as a special treat.

“We are thrilled to expand on our existing relationship in Italy and assist SISAL in their growth in the Spanish market,” said about the partnership Nick Barr, managing director at Red Rake Malta.

“packed with all the best features from Million 777”

I checked the demo version, and I like it! :) I like the background for Million 88 more than for Million 777. It was too much-blurred for my taste. :)

We can find here a long list of great features. I will check them out ;)

There is something unique with their games. I liked this one as well.

I love how they sort of “rearrange” the game’s mechanics and create something new from an already established hit. It takes experience to repeat success, so let’s see if the successor will outperform the original.