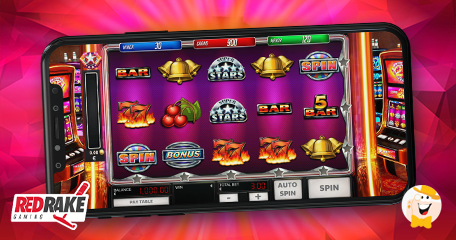 After releasing Mega Rich at the end of June and giving its players a chance to live the life of a true millionaire, Red Rake Gaming is back with a new slot game from the highly successful Super Stars franchise.

The studio’s latest follow-up brings up the thrills of sticky wins, multipliers, and a range of endless features. Buckle up and get ready to discover a fantastic title with the potential of becoming a new favorite for thousands of players around the world!

Unlike some earlier releases from the popular series, Super 25 Stars comes with a new innovative wild symbol. Its main superpower is to trigger the Sticky Wins feature once it appears on the central reel. As a result, each winning combination will remain fixed in place and launch a respin.

As spins continue, they move the multiplier panel forward one step. The wins from the spin are increased by the multiplier, adding a sense of excitement as soon as the Super 25 Stars symbol emerges on the central reel.

Another great attraction is called the Crystallize Symbols feature. It begins when the blue stars light up in right-hand corner of the interface. When this highlight begins, the Crystal symbol transforms other symbols of the same type into crystals and also multiplies them with a random factor to trigger a bigger win.

Amazingly, the latest slot game from Red Rake Gaming also includes all the best wins from the massively successful Super 5, Super 7, Super 10, Super 12, and Super 15 Stars. Each one of these earlier releases has been highly successful and popular among the players, so make sure to check them out.

Next, it’s all about the Star Fusion Minigame. You may know it from Super 15 Stars as a round that is activated by filling the progress bar on the side of the screen. Here you can obtain even more wins by combining Super 15 symbols with other bigger icons.

In addition, the Super 12 symbol will launch another great attraction, called “Lucky Stars”. During this mode, the symbol is converted into 3 stars. These retro symbols remain fixed and offer 3 complimentary spins that can be reset with each additional star. Throughout this feature, it is even possible to accumulate wins in the “Minor, Major and Grand” jackpots.

At long last, the Super 10 symbol will activate the exciting “Super 10 Mini-Slot” with interesting wins and instant spins, multipliers or the “Roulette Frenzy” win. The Super 7 stars symbol expands, remains fixed and launches a respin, while the Super 5 stars symbol multiplies the bet up to x200 with the “Roulette Bonus”..

Thanks to its large variety of features, Super 25 Stars is considered to be a comprehensive video slot that will likely keep players eager and attentive for a longer period of time.

Super 25 Stars is live since 28 July at all partner casinos, so if you want to take a closer look, head on over to your favorite platform right now. The game also works with the Red Rake Gaming tournament tool.

“a fantastic title with the potential of becoming a new favorite”

Classic-looking slots are definitely my cup of tea, and Red Rake does an excellent job of making them appealing to players.

Looking great, the series has become quite catchy and loved by the players, RRG did a great job with each earlier release. Nice features too.