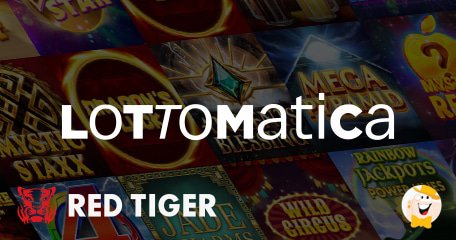 According to Alessandro Allara, Managing Director of Digital at Lottomatica, the addition of some of the industry’s finest products represents a great boost for the company. This milestone deal allows the venue to take a new leap forward in packing its platform with innovative and engaging titles.

Among the featured releases…

…punters can find lots of favorites such as Gonzo’s Quest™ Megaways™, Dragon’s Fire Megaways™ Piggy RichesTM Megaways™, Dragon’s luck, and Mystery Reels. In the upcoming period, the selection will be enhanced with the addition of the supplier’s successful daily and progressive jackpots.

“It’s great to be live with a progressive operator like Lottomatica and is another milestone in Red Tiger's continued push into the Italian market. The initial batch of games are all proven hits and, with more on the way, there's lots to look forward to for players, no matter what type of game they enjoy playing.”

This summer has been more than successful for the studio, as it scooped numerous acknowledgements. Near the end of June, Gonzo’s Quest™ Megaways™, which crows the collaboration between Red Tiger and NetEnt, has been named Casino Product of the Year at the 2021 Global Gaming Awards in London.

At the beginning of July…

…the provider received two honors at the EGR B2B Awards. The studio was recognized as Mobile Supplier of the Year, while Red Tiger and NetEnt received the Innovation in Slot Provision.

On top of that, Evolution, another RT’s close business associate was awarded Live Casino Supplier of the Year, beating eight other shortlisted providers.

Back in May, the producer got the unique opportunity to exhibit its products to US players. This was made possible via BetMGM Casino and Borgata Casino alignment, thanks to which punters in Pennsylvania can check out immersive adventures such as Cash Volt and Wings of Ra, and many more.

…March was marked with a YoCasino deal, enabling the supplier to launch its releases to Spanish consumers. Dragon's Luck, Pirates’ Plenty: Battle for Gold, Dragon's Fire MegaWaysTM, and Mystery Reels were some of many stories which became available with the Rank Group-owned brand.

Any New Games on the Horizon?

A couple of days ago, the studio unveiled Neon Links, a 5x3 slot drawing inspiration from the bright lights of Las Vegas and classic fruities. Equipped with mid variance and medium hit frequency, the release is packed with 10 lines and max win exposure of 1,000x.

In the upcoming days…

…players can expect The Wisecracker Lightning, a 5x3 title with massive exposure of 9,500x. Scheduled to go live on August 19, this game hosts high volatility and a nudge feature.

With this deal, more people will get a chance to check out Tiger's cool games!