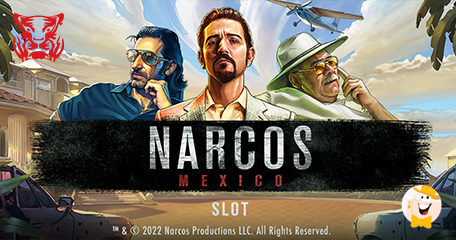 A Slot Homage to the Global Hit TV Series

Following the huge success of the Narcos video slot presented in 2019, Red Tiger and NetEnt are happy to introduce players to one more action-filled installment named Narcos Mexico slot. Taking place right in the middle of the battle, this game gives players the chance to meet rival bosses and notorious gangsters.

You have surely noticed that paying tributes to worldwide popular TV shows and series is not a new thing in online slot production. Aside from bringing a whole cast of beloved characters, such interpretations also give a whole new perspective to the story, which is precisely the case with Narcos Mexico slot by Red Tiger Gaming.

It’s All about Action!

Accommodated in a 5x3 layout, Narcos Mexico slot brings 243 paylines and max win exposure of over 10,000x bet. Infused with high volatility and massive hit rate, the game is optimized in a multiverse of languages and functions well across all sorts of devices.

…it displays Win Exchange™, Cartel Spins, Mystery Territory Symbol, Cartel War, Cartel Connections, Supply Drop, and Double Cash. When a player scores between 30x and 100x the stake, he can exchange the entire win amount for a chance to score 3 Cartel Spins. Double Cash appears randomly after a winning round, giving an opportunity to double the current win.

Todd Haushalter, Chief Product Officer at Evolution noted that he’s always excited to unveil a branded addition to the catalog, especially if it results from a fruitful partnership, such as the one between NetEnt and Red Tiger. Gonzo’s Quest and Piggy Riches are just some of the excellent releases given new perspectives upon inking the deal between two corporations.

He noted as follows:

“This new Narcos Mexico Slot is a great example of this and it’s going to attract new and casual players in a big way. Narcos Mexico Slot gives players the chance to enter this fast money world in a completely fresh way and we can’t wait to see what players think of it.”

When it comes to the series itself…

…it was aired from November 2018 to November 2021. Even though not all the events and facts are historically accurate, the series gained global popularity as it managed to reflect the unique atmosphere of that time and all the characters involved.

Don’t Mess Around with the Bad Guys!

Featuring the same number of rows, reels, and paylines, Narcos slot portrays the dark underworld of 1970s Columbia. The agents are trying to put the infamous crime boss Pablo Escobar behind the bars but, as one may expect, they face lots of obstacles and challenges trying to do so.

Taking a look at the set of symbols, players shall discover lots of themed icons. High-paying symbols include a plane used to smuggle contraband, Escobar’s flamingos, and two agents Peña and Murphy who are determined to bring the notorious criminal to justice. Lower value icons are represented by card symbols.

Gave you already checked out any of the Narcos slots? Let us know how you liked the features and visuals in the comments section below!

I am sure this Narcos-themed slot will draw attention and attract a huge number of players. When Red Tiger and NetEnt work together, we should at least try out the release and test our luck.

I really liked the series and I will definitely try this slot, they showed the characters nicely, it must be a lot of fun.

I expect really big wins from this game..10.000x bet, High volatility and all those features seem promising to me.

This slot is so much better than a NetEnt version, the graphic is better, and features too.

I had no doubt that NetEnt and Red Tiger would do a great job! Illustrations are awesome, features are powerful- what else to say!