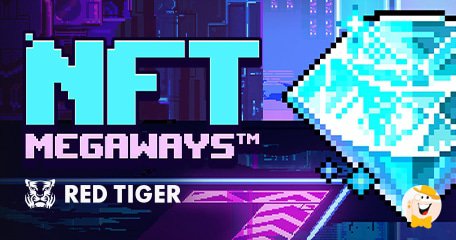 The title depicts four CryptoPunks, special collectible characters designed by Larva Labs that belong to the earliest examples of NFTs. The owner of Red Tiger, Evolution Group, purchased the digital artworks and the ownership proof is presented on the Ethereum blockchain.

NFT Megaways slot features Evolution’s CryptoPunks along with the slot reels which multiply the value of cash awards delivered to players. The game is inspired by the rapid increase of interest in cryptocurrencies along with the enhanced rate of trading.

NFT Megaways™ slot comes with six reels, introducing a special and engaging crypto pixelated experience that will be familiar to people who have followed the rise of NFTs. The central part of the game is reserved for the four characters CryptoPunks 914, 3008, 4701, and 8143 – which stand out with a diverse and exotic look.

Recent Milestones from the Brand

Red Tiger has recently completed another milestone by signing a content deal with the Italian casino and sports betting platform, Lottomatica. Following the new deal, Lottomatica will offer a variety of Red Tiger’s popular trademarked titles such as Gonzo’s Quest™ Megaways, Dragon’s Fire Megaways, Piggy Riches Megaways, Dragon’s luck, and Mystery Reels. It will be followed by the introduction of other titles with the potential for daily and progressive jackpots.

“It’s great to be live with a progressive operator like Lottomatica and is another milestone in Red Tiger's continued push into the Italian market. “The initial batch of games are all proven hits and, with more on the way, there’s lots to look forward to for players, no matter what type of game they enjoy playing.”

“Red Tiger has just unveiled the addition of NFT Megaways™”

Being a leading brand, I am glad that they offer innovative products from time to time and this time they created the first slot game to include NFTs. The recent partnership made with the Italian casino will definitely boost their presence in their market. No doubt they keep doing a great work in many fields.

Red Tiger is fantastic and their games are really impressive…